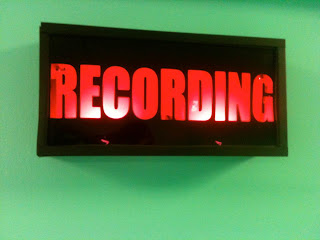 This is the recording sign out side of Studio A. It is the equivalent of an "On Air" sign at a radio station or more pointedly, a "Do Not Disturb" sign on a hotel door. The recording sign, when lit, is actually telling people two things: 1) Please keep the noise levels down in the areas just outside the studios and 2) Do not enter. Sadly, many people do not seem to understand these things which leads to studio engineers, directors and even narrators to come charging out the booth to give offenders dirty looks.

There is a lot of sound baffling and insulation in each of our booths, which keeps out a lot of noise; but very simply can't compete with the cocktail party level of conversation that people like to hold outside the studio doors and windows. Plus, some someone at our company decided that the hospital-green walled space outside the studios was the perfect place for a monster copier machine. The copier itself can't be heard in the studios, but the people who like to chat it up while waiting it for their turns at the copier can. They are probably trying to compete with noise of  the copier machine; but I cannot rule out the possibility that their collective and general experience as habitues at local bars and restaurants makes them think they are talking normally. Also, I am not ruling out the possibility that everyone is deaf. Yes, it's that loud. Why is this a problem? One the noise is distracting and two, there are noises that will get picked up the recording. It can be particularly disappointing when the narrator has just worked through a particularly difficult passage involving Irish wristwatches and or a run-on sentence that covers a page and a half, to have to do it again because someone was squeeing in delight over baby pictures, at a frequency to alarm dogs. The only thing that makes this whole situation worse is when the overheard conversations aren't even interesting. Really, I just don't think that,

should be acclaimed with the same fervor and volume as,

"THE BUILDING'S ON FIRE!"


Oddly, there are also people who see lit recording sign and think it's a "Welcome" sign. It's actually exactly the opposite. Sometimes we have celebrity narrators, authors as narrators, or guest narrators that everyone wants to see work. They fail to understand that the act of observing actually does affect the process being observed. The narrator is there losing himself in the story; and the engineer (and the director if the session requires one) are right  there along with the narrator in an intimate setting (To put it bluntly, walking in on a recording session is akin to walking into a bedroom while a couple is having sex.) In comes someone who has decided to see what's going on or meet the narrator. The intimacy is broken. Now the narrator has an audience. Even if the session ostensibly continues, the reading has a different feel. Often, I've had to scrap the sections that were recorded while there was an audience and re-record those sections. Every interruption is a delay.

Whether you know someone working at an audiobook publisher's studio or at home, please think twice about entering the studio space when the "Recording" light is on. Or that hotel room with the "Do Not Disturb" hangar on the door as a matter of fact :-/