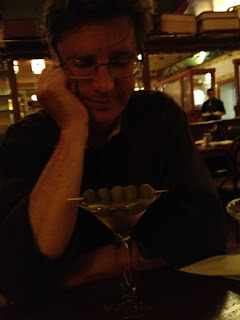 This is a picture of Grover Gardner staring goofily at his martini at Pigalle's in New York City. I suspect he has sent me this picture to taunt me: "Here I am at a fabulous French restaurant in NYC where they make my martinis just the way I like them. Don't you wish you were here?" Well, yes, !@#$%, as a matter of fact I do wish I was there, especially to savor a plate of their duck and champagne; but I'm not. I'm here in Southern Oregon having just come from a Shari's where they had run out of Strawberry Pie (and on only the second day of Strawberry Month!) but I digress...

The helpful bit of advice that I would actually like to impart to many first-timers to the #APAC2012-#BBC2012-#Audies2012-#BEA2012 week-long extravaganza is this: You've got to pace yourself. There are going to be an incredible number of invitations to go places, drink alcoholic beverages, eat fattening foods, see shows on Broadway, off-Broadway and off-off-Broadway; in addition to the regularly scheduled events, meetings and meet-ups. Last year, I went to APAC, The Audies, BEA and Book Blogger's Convention and I hit the ground running. I was in NYC for six days; but I was toasted by the end of Day #2! By the end of the week, I was staggering, my face swollen with exhaustion and trying my damnedest to remain standing and coherent. By 7:30 Friday night, I was passed out in a hotel room surrounded by ARCs and busted out shoes, ten pounds heavier and ... well, let's just say, it wasn't a pretty sight :-/

Yes, I know I could have made smarter choices; but the fact of the matter is, is that NYC offers so much that you will want to see and do, and eat and drink, places to go and people to see, that it really requires mammoth amounts of self-restraint not to take advantage of all of the opportunities! Plus, you're surrounded by friends and colleagues, people you want to see, people you just have to see and, the people who just have to see you! If you're not careful though, your week can end up looking like After Hours (starring Griffin Dunne) - on a continuous loop :-/

If I could have a do-over (and I certainly hope to have the chance next year,) I'm not gonna lie; I would still order the duck and champagne, the truffle-oil dressed pasta, the vodka martinis, the single malt scotches, hit the delis and Greek diners, museums and shows and, meet-up with everyone; but maybe I wouldn't indulge so much and I would definitely self-impose a curfew. Two hours of sleep a night just simply isn't enough!

And, yeah, on my final night, I would have no shame in admitting that I was watching cable in my hotel room. Otherwise, that long plane/train/automobile trip back might qualify as the worst hangover experience ever... outside of that time involving tequila and a plastic dinosaur on Columbus Circle anyway :-D