For January, 2009, the Yahoo! Group, Sounds Like a Mystery (SLAM,) which discusses audiobooks in the mystery genre, selected The Black Echo as the group listen. Recently, a twitter thread appeared in which the book was being recommended from one friend to another and I thought I would post a blog review from my notes on the SLAM discussion. Instead, I've decided to post my discussion responses in full, with editorial notes in red, like this.
I purchased a used copy of The Black Echo from an Amazon Marketplace vendor and though the box showed a teensy bit of wear, the 12 CDs inside were perfect. 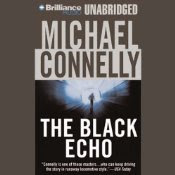 · Did you like the book? Why? Why not? What did you think about the plot?

I was remarkably ambivalent about "Black Echo." I neither liked it nor disliked it, but it would be harder to convince me to like it than not. Police procedurals have gotten formulaic (cf Martin Beck, John McClane, Inspector Rebus) with stock characters and plot devices. Protags tend to have a traumatic event in their past, dysfunctional domestic lives, a method of doing things outside of departmental procedure, a degree of a Luddite mentality and, a way of snagging an attractive counterpart along the way. Plot devices include some organizational preparation, the hunch and, then the stroke of luck, which brings it all together. In a year, it may be hard for me to recall the specifics of this story outside of the Viet Nam references.

The narrator is Dick Hill and I am not a fan. I've endured samples and even a couple of CD sides of other books and this is my first full audio book by him. I do not care for the way he breaks up certain sentences or, the whiny quality to his voice. The cinematic styling of the story may also have contributed to my experiencing a disjunct between Dick Hill's voice and what I imagined Harry Bosch to be like. I was imagining Al Pacino/Serpico and Dick Hill provided an odd mid-western twang with an occasional New England drop of the "r," for character delineation (e.g. Rourke).

I am aware that there are people who love Dick Hill and others who, well, do not. Whichever way your preference lies, my opinion can either mean nothing or everything. I'm okay with that, so please don't take my disappointment with this performance as a personal assault on your sensibilities. Thank you.

IF YOU PLAN ON READING OR LISTENING TO THE BOOK,

PLEASE JUMP AHEAD TO THE NEXT QUESTION WHICH STARTS AFTER

· Did you figure out “whodunit?” Was there a twist that threw you? Was the plot believable? Did you get hooked? At some point did you have a hard time putting it down? What was the point?

When Eleanor started "acting differently somehow," the listener had been telegraphed that she was involved in some way, but the extent of her involvement was not clear. By the time Harry had looked (two or three times) at the vase of daisies in the hospital, ruminated over the look on Rourke's face when he was shot down and, listened to Eleanor mention that she was quitting her job to travel with money she had saved, the "leftover" criminal had been tipped pretty heavily (I actually thought the diamonds were going to turn out to be IN the vase of daisies, mixed with the water and, that Eleanor had come to claim them there OR that she was going to offer to split with Harry. THEN she would be nabbed by the powers-that-be (who would have left the tape recorder going) while she attempted to flee to a non-extradition country!) At the end of CD 11 (when Harry grabs his clothes and makes to leave the hospital), thinking that the audio book was over, I thought that a nemesis was being born... how interesting! Eleanor was going to turn out to be smarter than I gave her credit for! I was ready to go get the next title in the series! Alas, there was one more CD and it was a disappointing end of the story arc. The visit to the mock Viet Nam Memorial a little confusing. I had understood that Harry HAD found Eleanor's brother's name on the monument, but the opposite was true (?!) Anyway, Eleanor’s motivations were anti-climatic and not very convincing.

· How did you feel about the main characters?

· Did anyone or anything distract you in the story?

This is the second Brilliance title I've handled within the past six months (the first was "The Woods" by Harlan Coben and narrated by Scott Brick.) Both titles were on CD and both had terrible production values. Three was a suppressed quality to the overall recordings and they also use a sound effect that drives me crazy: when there is a telephone conversation in the story, Brilliance engineers manipulate the voice for the "person speaking on the other end of the line" to sound like they are on the telephone, on the other end of the line. I find it annoyingly distracting. It always pulls me out of the story and reminds me that I'm listening to a guy, in a booth somewhere, reading the text and later, an engineer looking at a sound wave on a screen. I've stopped "experiencing" the book.

· Did the book grab you emotionally? Did you connect with the characters in the book? With the place?

No, the book did not grab me emotionally. Perhaps this novel resonates more with people who are contemporary with Harry Bosch. In my lifetime, the Viet Nam War was something very remote (I was born two days after the first US troops were formally introduced into the conflict and only ten years old when Saigon fell.) None of my family members served. Viet Nam has really become something of a media permutation and less of an experience, even a tangential one, for me. I would probably identify more with those who fought in Desert Storm and of course, I know people who are "in the sandbox" now. As for the tunnel experience, I don't really suffer from claustrophobia (except when I'm on a plane for too many hours and forced to breathe processed air), which is the closest thing I can imagine the tunnel/sewer experience being akin to. But again, I'm not "feeling" the gut-wrenching angst or Black Echo PTSD (just a need to open a plane window!) The flashbacks in the book had a very cinematic quality to them and perhaps that too, is why it didn't hit a nerve with me. There were times that the book felt like an amalgam of "Apocalypse Now," "Hamburger Hill," and "Die Hard."

Since listening to THE BLACK ECHO, my figurative distance from The Vietnam War has closed and I now am extremely fascinated by the topic (of the Vietnam War.) It's very possible that had I listened to the audiobook after having listened to MATTERHORN, I may have responded differently to the flashbacks.

· What about the use of sex or violence in the story?

Here, it must be noted that when I wrote these responses, I had created and was using "The Ellroy Scale" whereby children's books and cozies rated low on the scale in terms of sex/violence ("00" - "01") and James Ellroy's novel, The Black Dahlia, rated a "10." The scale mostly reflects an "Eeeew!" factor and is totally subjective on my part.

01 Crocodile on the Sandbank

03 To Kill a Mockingbird

· Would you seek out other books by this narrator?

Posted by dog eared copy at 2:53 PM No comments: