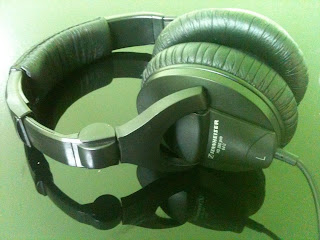 These are the Sennheiser Pro HD 280s, the headphones that are the most common in stock at the company I work for. They clamp around the head and provide great sound. And I hate them. I hate them because I always feel like my ears have been vacuumed sealed and somethings I imagine my eardrums coming out when I take the headphones off. I hate them, because after a couple hours in the studio, it feels like a vice and I end up propping one earpiece off and wearing just half the set; alternating ears every twenty minutes or so. The narrators don't seem to mind wearing them though, which is just as well because they are closed-backs and the mic can't pick up any feedback from them.

For myself, on the other side of the glass, I prefer a lighter-weight, open-backed headset and right now I'm pretty happy because I have a set in play in the studio I'm working in (I believe the set I'm working with right now might be the Sennheiser 650s.)  The only thing is, is that they are far from noise canceling so I also hear the noise in the hall outside the studio as some Other People apparently feel the need to talk about their week-ends as if they were at an APAC Mixer in NYC :-/ Still I take the trade-off, because the frequency of noise distractions is less then the incidence of pain when I wear the HD 280s.

For many people, a pair of headphones is a pair of headphones; but if you have to work with them x number of hours a day, you need a pair that picks up all the sound and is comfortable. And regardless of your choice, you really do have to take breaks form listening. You know if you've been on the headphones too long of you start having headaches, if you starting getting a ringing in your ears or, when you take off your headset, you suffer from some auditory hallucinations...

True Story: In 2007 I had to work on proofing a book that was a crush. The company wanted the book fully proofed and slated by the next morning so I pulled an all-nighter. I did not take listening breaks. At somewhere around 4:00 the next morning, I took off the headsets and started typing up my notes. Except I was distracted. It sounded like my refrigerator was singing Dolly Parton. At four a.m. there really is no one that you can ask, "Can you hear that?'  so you pretty much resign yourself to the fact that your ears are toast or that "bad trip" you took in college is still manifesting itself or that your refrigerator is actually channeling Dolly Parton or that you're insane. All bets are on, so not being able to resolve which one it was, I went back to filling out the proofing sheets, occasionally hearing Dolly wafting in and out.  Sometimes I would walk over to the refrigerator and try to pick out the song; but always it was tantalizingly distant or would fade away. Finally, I finished up and had to drive down to the company to deliver the work. It was a morning of Golden Fog: the fog rolls in; but instead of being all white, it's this incredible golden hue. Of course, you can't see any better driving through it than in a white-out; but it does add a surreal touch to the day, especially when you've spent the most recent hours contemplating past indiscretions and The Grand Ole Opry and if, in fact you've died and you can't tell whether you're in heaven or hell. Anyway, I eventually dropped off the work, went home and crashed. I never did hear Dolly Parton again; but I did resolve to practice safe listening after that!

Everyone once in while, I'll have to pull a double session which required longer stints on headphones and; one those days, after work, I always feel like my ears are blown out. It takes me  awhile to decompress and often, I don't want people even talking to me. Yeah, I'm a veritable ray of sunshine on those days!

There are studios that don't use headsets for session work, preferring to use monitors; but it's more difficult to pick up the finer noise anomalies (e.g. a stomach growling or a machine hum) in the wash of the sound as it travels over a wider area. It's better to pick up and correct as many noise anomalies in the session before it it heads out to proofing and post. Correcting at source provides a better over all recording.


At home, I have a pair of Grado SR60s which I adore though I could probably stand for an upgrade as they're pretty old and beat! In my husband's studio, he wears AKG K271s which he doesn't hesitate to extoll as the best and most comfortable headphones he has ever had.


What headphones or ear buds to you use?

P.S. - In case you were wondering, we did finally resolve The Mystery of the Singing Refrigerator: About eight months later, it sounded like our old built-in/wired-in 1950s heating units were singing something very hillbilly. On that day, just as when the refrigerator was channeling Dolly, there was low cloud cover. Putting two and two together, it seems that an AM radio station's signal was getting trapped underneath the cloud cover and some of our appliances were picking up the signal! It happened only once or twice again after that; and now, for whatever reason, our appliances have gone back to making just plain old humming noises :-)
Posted by dog eared copy at 12:01 AM