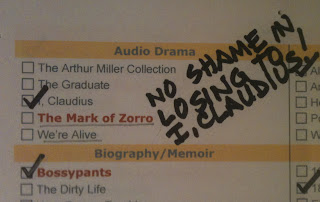 Last night, in NYC the official APA Audie Awards were meted out and, a dozen Armchair Audies participants vicariously experienced the thrill by following the action via twitter. I had printed out the Armchair Audies ballot so I could follow along. There were two trains of thought running through my mind as the evening progressed: The first was in comparing the Armchair Audies picks against the APA judges' picks and; keeping track of Blackstone Audio's nominations.

When the Audio Drama category was called, I really expected The Mark of Zorro to win; but when I, Claudius was announced, I wasn't surprised. I myself deliberated between The Mark of Zorro and I, Claudius and flip-flopped on my final decision many times! They are both truly excellent productions and, as I noted on my ballot, there is certainly no shame in losing to the BBC Radio 4 presentation (AudioGo.) I highly recommend both productions and am sincerely happy for AudioGo  :-)

Blackstone had been nominated for a total of twelve Audies and, as categories were called and the awards went to other audiobook companies, hope lingered until the final Big 5 categories: Best Narration by Author or Authors, Best Solo Narration - Female, Best Solo Narration - Male; Best Achievement in Production and, Audiobook of the Year. In the Big 5, we only had one nomination (The Mark of Zorro) in the Best Achievement in Production, so that meant we were not going to be coming home with our usual three of four. And we didn't win this one either. That's right, Blackstone was zero for twelve!

But Blackstone did garner one extraordinary distinction: The Special Achievement Award was given to Craig Black, the founder and owner of Blackstone Audio, Inc. Apparently, he got up, thanked his family, staff, some narrators, and then proceeded to have a poignant moment in remembering the late Yuri Rasovsky (audio dramatist who adapted Johnston McCulley's The Mark of Zorro and directed the production as well.) So, in the end, no one at Blackstone was terribly upset about not having won any title awards; but rather very pleased to have been recognized within the industry that they helped build.

And yes, I am happy they are not unhappy because that means I still have a job [knock on wood] :-) 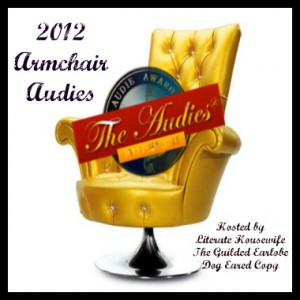