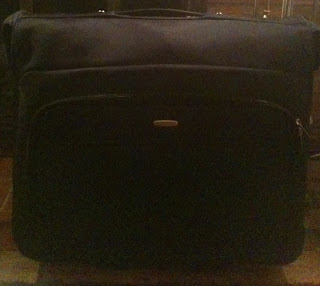 This is my husband's garment bag which he has packed for his jaunt to NYC. If you were to look inside, it would look like a blue Oxford button-down torte, each shirt layered with a different shade of khakis. Tomorrow he takes an early morning trans-continental flight in order to attend:


In between and all around these events are a number of meetings, meet-ups, early dinners, late dinners, teas (wine served before 5:00 p.m.), cocktail hours, nightcaps, shows... It's exhausting but  I would be lying if I didn't say I am extremely jealous that my husband gets to go this year and I don't :-/


Who do you think will win at The Audies?
Check out the contenders: The Armchair Audies 2012 Audie Awards Ballot