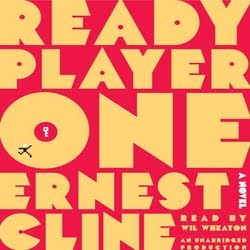 Wade Owen Watts is a teenaged gamer escaping the reality of life in the stacks (RVs and trailers stacked one atop the other in towers) in Oklahoma City. The year is 2044 and it's the third decade of The Great Recession in America. Infrastructure has deteriorated and people look to the cost-efficient technology of virtual reality for entertainment and education. In fact, the "massively multi-player online virtual reality reality game" of OASIS has become for many, the preferred existence: a place where you can create a better version of yourself and live a more interesting life.

"Parzival" is Wade Watts' avatar in OASIS and Parzival is playing a contest within the realms of OASIS, a game within the game wherein the objective is to locate three keys that will ultimately lead to an Easter egg. The winner of this contest will inherit Jame Halliday's (co-creator of OASIS) fortune and interest in G.S.S. (Gregarious Simulation Systems) - the company that has top administrative control of OASIS. The power and revenue of this fortune and interest are immense and so the competition for each of the keys and the Easter Egg is stiff. Wade/Parzival must battle IOI, a mega-corp with deep resources, both in OASIS and IRL for the Easter Egg.
Ready Player One is the ultimate story about quest gaming and what makes it more fun is that OASIS is an homage to the 1980s - a time when computer generated gaming starting elbowing out the pinball machines in arcades. There are references to the arcade games themselves (in fact Parzival plays them - in effect becoming an uber meta-gamer in that he's playing a game within a game within a game that has IRL consequences) as well a number of other cultural references from the eighties. If you're not a gamer or not familiar with the references, you might feel like you're missing something; but most of it is sufficiently explained to ameliorate any bewilderment; but if you are familiar with gaming and/or remember the eighties, Ready Player One flows without seeming didactic.

Wil Wheaton, the eighties icon known as the actor who played Wesley Crusher in the television series, Star Trek: The Next Generation, is the narrator for Ready Player One; and he was the perfect choice. He sounds like a young adult and handles the all the time-cultural references easily and naturally. In another very cool meta experience, Wil Wheaton's name occurs within the story :-)
Ready Player One is a fun, clever story and the audio is an equally fun and clever production in its choice of narrator. 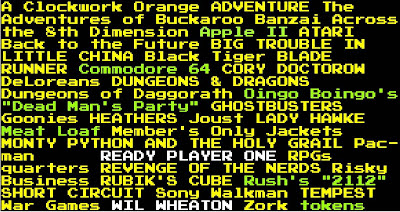 An image I created that mentions some of the eighties references in Ready Player One
The font is "Press Start 2P"
Are you old enough to remember the '80s?
Were you a gamer? What games did you play?
I was a teen during the eighties and I played some arcade and console games. At the arcades, I played Pac-Man, Ms Pac-Man (table top), Asteroids, Galaga, Centipede and Millipede. At home I had a Fairchild Channel F console which played cartridges. I distinctly remember a tank game, Desert Fox! My sister got an Atari 2600 and we played Pac Man, Asteroids and Missile Command. I remember my-then BFF, "A" (of Amityville Horror fame) had Pong! Do you remember the gaming wars? Atari vs Intellivision!
Other Stuff:
I purchased a digital dnload copy of this book through weread4you.com. I receive no monies, goods or services in exchange for reviewing the product and/or mentioning any of the persons or companies that are or may be implied in this post (including but not limited toauthors, narrators, publishers, vendors, hosts of challenges and/or challenges.)
Posted by dog eared copy at 12:01 AM