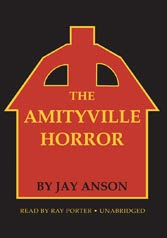 When I was eleven years old, I was a very devout little Roman Catholic girl. I went to Parochial School. I wore plaid skirt uniforms. I had nuns in habits for teachers who also wielded yardsticks. I paid attention in Church and when I grew up, I thought it was prerequisite to be a nun before you could be a teacher or nurse. I was a believer.

The year was 1976 and my best friend's name was A. That's not really her name or even her initial, but even now I'm afraid that somewhere, someone will know exactly who was complicit in this tale and I might get in trouble, like maybe go to hell or have my Confirmation voided or my eighth grade diploma declared invalid. Anyway, A. got her hands on a copy of The Amityville Horror. It was quite the sensation at the time and everyone believed it was true. How A. managed to get a copy of this book is not important; but it was lent to her with the caveat that she tell no one that it had been lent to her, who had lent it to her, and that she probably shouldn't tell anyone that she had the book at all. But I was her BFF and so of course I knew and of course, I was insanely jealous that she had been entrusted with this book when I had not. I persuaded her to lend the book to me for one night and she reluctantly agreed. And so begins the most terrifying period of my life. It started that night and ended four years later. During that four year period, I believed I was doing nightly battle with the Devil for my soul. I prayed fervently. I cried myself to sleep. I wouldn't sleep with my back to the door because for some reason, I thought Satan himself would bother with the courtesy of using a human portal to come after me. And every night, I woke up at 3:15 a.m. When I developed an allergy-induced eczema on my hands, I was ecstatic, thinking I was showing the ultimate sign of devotion, the stigmata. I was going to be a Saint! Of course, when a variation of that same eczema manifested itself on my scalp, I thought I was developing the horns of a devil and that I was damned. I think it would be an understatement to say that upon finishing that book that night, I was immediately scared and scarred for life.

Flash forward to 2009. One of The Sisters (Acquisitions Agents for Blackstone Audio) tells me she's bought the rights to this book. I hadn't thought about the book specifically for years, though I still hate seeing flies in cold weather and still prefer not to sleep with my back to the door. I tell her the story of my eleven year-old self which was probably a mistake as she starts sending me "funny" e-mails, signed "Jodie." Sigh. A little later, I was in Studio A working with Ray Porter on another project and he mentions that's his next narrating job is The Amityville Horror. He talks animatedly about the book and we share a few laughs and he goes on his way. I can't wait to hear the audio. Though I had hoped it would be released by Halloween of 2009, it was released in March of 2010 (?!)

And so now we come to 2010. It's Halloween and I want to listen to this book because I want to see if it stills has any hold on me and because I remember Ray Porter being so enthusiastic about it. When Jason was looking for recommendations for an October Selection for The Audiobook Club Online, I didn't hesitate. I offered copies for a promotional give-away and we were off.

I uploaded the audio onto my iPod and, I have to tell you, when I heard the Priest's Introduction, there was a moment when I had to take a little breath. I wondered where my rosary beads were and if I found, them, would I remember how to say it? But after the Introduction, I have to admit I was a little disappointed in the audio for two reasons: 1) Ray Porter sounded stiff and 2) the story didn't seem scary or real. I really don't know what to say on Ray Porter's behalf, other than that, if you had heard him talk about the book in Studio A that day, you wouldn't recognize the narrator of the audio. Gone was the enthusiasm and half-convincing incredulity. I mean, as much as we scoff at tales of the paranormal, I think I can honestly say there's a part of us that illogically believes. I wanted to hear that little voice that decried the debunking of the story. Ah, the story itself. The writing seemed a bit amateurish and the story unbelievable. Could anyone really have believed that story? Looking at the story now, it seems pretty clear that George and Kathy Lutz took on more than they could financially handle when they purchased that house and, they found a way to exploit The Exorcist fad and walk away from their mortgage. I say that and sound so cynical. But I know that given the chance to live at 112 Ocean Drive, I wouldn't. All it would take would be for me to wake up one night at 3:15 a.m. and that "little voice" I spoke of earlier? That would be the screams of an eleven year-old who still believes.