Ah, The Great 48 - the forty-eight cubic feet of stuff that occupied the center of my home office/library has officially been virtually eliminated. I won't say that it has been vanquished yet; but the morass of papers-and-things has been sorted down into six small bins. My idea is to tackle each of these bins in the coming weeks (off camera) and make them disappear altogether. The solution to some of the paperwork will be to scan and store the documents; while in the case of some children's books and toys that I want to keep around will find a home on a birch bench that I plan on acquiring for the space beneath my window; and still yet still more stuff will be "let go." We talked a little bit about letting go last week, in that in many cases pragmatism must win out over sentimentality when clearly hanging on to stuff works against us. When stuff is taking up space and not doing us any good, it's time to let it go. This week I want to talk about another kind of letting go: This is about Projects. Maybe it's the Scout training we got when we were kids; or maybe it's watching too much of The Home Improvement Network; but you know how it goes. We see a Project and we think: I can do that! I should do that! I want to do that! In the excitement, we get the stuff together to start the Project and then... something happens. Or more accurately, nothing happens. For whatever reason the project stalls and the stuff lies around gathering dust, getting lost, getting damaged, and taking up space. For me, the projects ranged from making bottle cap fishing lures, to creating gift baskets for my niece, to making an iPod recharger from an Altoids tin. It's time to let go of all that. While it is true that I can or should do certain projects, the fact remains that I simply do not have the time. I work full time and have a family and dogs. When I do have spare time, what I like to do is read. Albeit, in the past few weeks I haven't had as much time as I would have liked to read, owing to this project; but the fact remains that once my time is freed up, I am going to be somewhat less inclined to about gilding mirror frames than I am going to want to catch up on my reading. And so, the Projects go: The bottle caps and Altoids tins get thrown away, the baskets get donated to a charity, the used clothing fabric I was saving for quilting project will become rags, be donated or thrown away. I need to stop thinking that "one day" I'll get around to it. I need to Let Go :-) 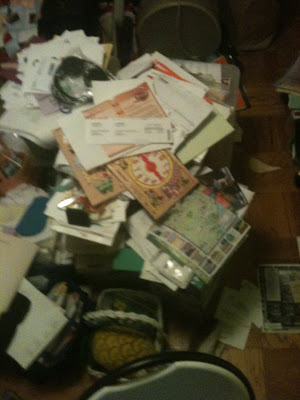 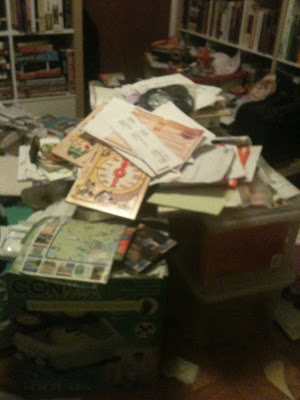 The Great 48: Ten weeks ago 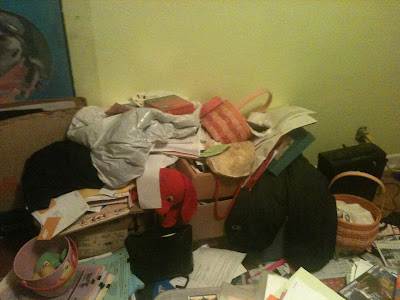 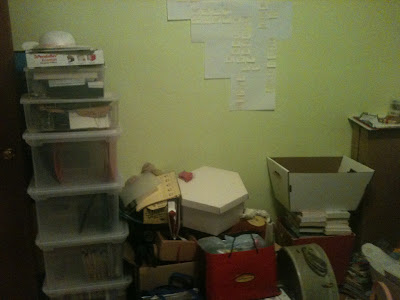 The Great 48, much diminished and up against a wall:
Four weeks ago (left ) & Three weeks ago (right) 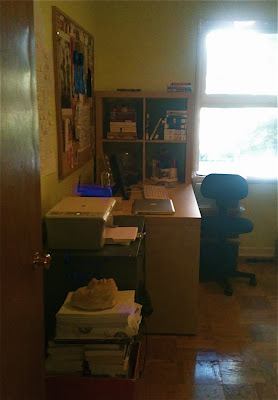 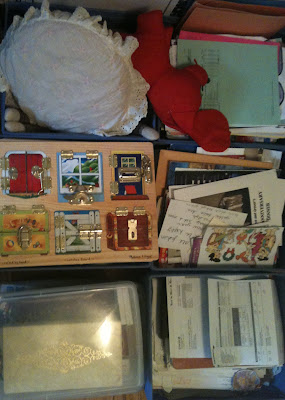