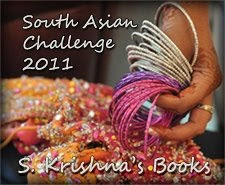 I did it! I managed to complete my one book pledge for the South Asian Challenge! If you're wondering why this is such a big deal (after all, one book doesn't seem like too much to ask) it's because, well... it's Gregory David Roberts' fault! A few years ago, he wrote a book called, Shantaram. It's an amazing epic adventure about Lin, an Australian convict who escapes to India. I listened to the audiobook, narrated by Humphey Bower and, quite simply, it is one of the most amazing books, ever. That's right. Amazing. Ever. In Shantaram, the listener basically falls in love with Lin as he makes his way through the different echelons of India's cultures, forms relationships and, experiences what it is like to be a stranger in a strange land. Encouraged by Shantaram, I eagerly signed up for the South Asian Author Challenge in 2010 and promptly dived into the critically acclaimed White Tiger (by Aravind Adiga.) This was the first of three books I had pledged to read that year; and the only one I finished. I was incredibly disappointed in White Tiger. Maybe it's because, as a native writer, there was much that Aravind Adiga took for granted or didn't think the reader would be interested in; but after having all the exotic senses appealed to in Shantaram, White Tiger felt flat. After that early disappointment, I lost interest in the South Asian Author's Challenge. But when the 2011 edition was announced, I felt a need to redeem myself somehow. @SKrishna made it easy by slightly modifying the rules: There was a one (1) book pledge level; and the author didn't have to be South Asian (hence the challenge's subtle re-naming.) I seriously considered re-listening to Shantaram - that's right, all 42.6 hours of it (it's that good); but on the other hand, I had cached a few books for the 2010 challenge that I hadn't gotten around to.
The one that I ended up picking was actually the one that, for years, I had been intimidated by! The Satanic Verses (by Salman Rushdie) had such a reputation preceding it, that I wondered if I was intellectually capable of "getting it!" I had this idea that Salman Rushdie's writing was as obtuse as Umberto Eco's; that I needed to be more erudite on Muslim theology; that I was overreaching. What caused me to screw my courage to the sticking place and pick this title over the other South Asian titles in my stacks was simply a sense that it was time to do so. Not very epiphanic; but there you have it. I dnloaded The Satanic Verses in audio (narrated by Sam Dastor.) Very quickly, I was engaged and fascinated by the story and laughing at myself for ever having been afraid of this novel!
I finished The Satanic Verses last week and I've been thinking about various aspects of it since: The imagery of William the Conquerer as he landed in Britain; the dreams/time-traveling/hallucinations of Gibreel as he encounters The Prophet and, the Butterfly-clad Ayesha in particular. There were many things I could have written about in regard to The Satanic Verses: magic realism, identity, redemption, good and evil...; and I chose last week to touch on magical realism; but in the future, as I suspect I will be returning to this novel again, I may come back to one of these themes or uncover (a) whole new level of meaning(s).
I recently had occasion to check the print version online (I was looking for a reference while briefly discussing this book with someone else who had read it, albeit a few years ago) and I was struck by how great a job Sam Dastor did in narrating The Satanic Verses. He kept the story moving. Looking at the text, I think I might have been overwhelmed if I had tried to tackle reading it in print. There is an omnipresent invitation to worry over every passage, to wring out of it all meaning before moving on. I think I would have been mired in it very early on and not finished it. But I did finish it and I'm very glad I did!
Thank you Swapna for hosting The South Asian Challenge 2011 :-)
See Also:
Other Stuff: I receive no goods or services in exchange for mentioning any of the persons or companies that are or may be implied in this post (including but not limited to publishers, vendors, authors, narrators, the host of the challenge and/or the challenge itself.)
Posted by dog eared copy at 12:01 AM