Back to the Classics Challenge 2012 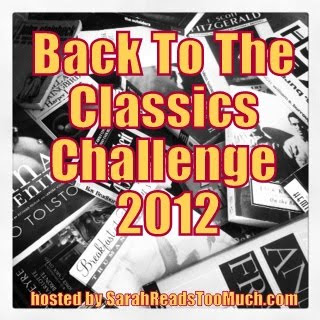 I have a rather prosaic definition of what a Classic is: It's basically anything labeled as such in the Barnes & Noble Classics Series. While you may snort, and think me rather unimaginative, I find no reason to re-invent the wheel in trying to re-define what a Classic is by any other terms than that it being a public domain title with enduring appeal.
I first found out about the B&N Classics Series in 2007 when I first moved to Jackson County in Southern Oregon. Within 4 months of my arrival, all fifteen branches of the county library system shut down for six months because of budget shortfalls. It was the largest and longest library shutdown in the country at that time. Having refused to transport thousands of books across the country, a very expensive proposition, I found myself literally bookless :-(
I started raiding garages sales, friends and relatives were kind enough to lend and/or give me books and, I discovered the Classics series at the local B&N. For $6.95, I was able to pick up a copy of Pride & Prejudice and I was thrilled! I was on an extremely limited income and owning a new book was luxury.
Ever since the library shutdown, however, I have been a book hoarder! I still scour garage sales, used books stores, book exchanges and, yes I still pick up a Classic from the Barnes & Noble Series every so often. The net result is that I literally live amongst stacks of books, tripping over books that I suspect have flung themselves onto my path in sheer desperation of being noticed and in hopes of being picked up and read! And this is where the Back to the Classics Challenge 2012 comes in. I have stacks of Classics, enough to do this challenge many times over I suspect; but I will limit my commitment to one title in each category and see if I can't make a dent in my TBR lists :-)
Subject to change, this is a list of the titles I have in mind to fulfill the Back to the Classics Challenge 2012:
All of these will be Barnes & Noble Classics Series editions in trade paperback format, with the exception of The Wizard of Oz (a Barnes & Noble Classic title available as an eBook on my nook) and Julius Caeser, which is an audiobook. I will be posting reviews on this blog and at goodreads
Thank you to @SarahReads2Much for hosting
The Back to the Classics Challenge 2012!
Other Stuff: I receive no goods or services in exchange for mentioning any of the persons or companies that are or may be implied in this post (including but not limited to publishers, vendors, authors, narrators, the host of the challenge and/or the challenge itself.)
Posted by dog eared copy at 12:01 AM

Email ThisBlogThis!Share to TwitterShare to FacebookShare to Pinterest
Labels: Back to the Classics Challenge 2012, Letter of Intent