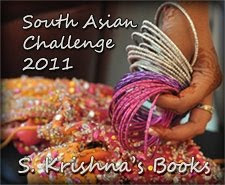 To promote more people reading South Asian literature, Swapna Krisna is sponsoring the South Asian Challenge 2011. There have been a couple of changes to the challenge from last year, which broadens its scope and appeal: While any book's setting must take place in a South Asian country, the title does not necessarily have to be written by a South Asian and; there is a one-book commitment :-)
Last year, I did not meet my three-book commitment (hangs head in shame.) I only read one title, The White Tiger (by Aravind Adiga) but I had managed to cache quite a number of qualifying titles for the challenge anyway. Now in an effort to make significant headway into by TBR stacks, I think I can manage to read at least one of the South Asian books in that stack!
Some of the titles I am considering:
Shantaram (by Gregory David Roberts; narrated by Humphrey Bower) - an epic tale about an escaped Australian convict who ends up in India. This story has it all: love, loyalty, pageantry, squalor... Yes, I've listened to all 42+ hours of this audiobook before but I would love to listen to it again. It's that good.
Sacred Games (by Vikram Chandra) - I have this in both print and audio (narrated by Anil Margsahayam) - I may not be able to follow this in audio so I have a backup print edition, just in case
Satanic Verses (by Salman Rushdie; narrated by Sam Dastor) - This is a title I may combine with the What's in a Name Challenge #4 for the category in which readers pick a title with "evil" in the title. I have to admit though, I find it a little intimidating and may instead end up picking one of Rushhdie's children's folk tale books as an entre to his writing.
The Palace of Illusions (by Chitra Banerjee Divakaruni; narrated by Sneha Mathan) - audio
The Twentieth Wife (by Indu Sundaresan; narrated by Sneha Mathan) - audio
Heat and Dust (by Ruth Prawer Jhabvala) - 1975 Man Booker winner
Posted by dog eared copy at 8:52 AM