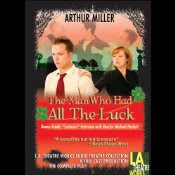 Dave Beeves is a lucky man: his childhood sweetheart is now his bride; his auto repair shop is a success owing to an experienced mechanic walking into his shop at exactly the right time; he has a happy, healthy son and; he has just started out on a new venture in setting up a mink farm. But, as he is witness to everyday, not everybody has their dreams come true, despite their hard work and efforts; and even more bizarrely, their bad luck seems to be the currency of his own good fortune. Surely, this karmic debt will need to be paid, right? As Dave continues to gamble with his luck as his ante and, his family, friends and money as his collateral, there is excruciating tension as he "lets it all ride" on a major investment.

The Man Who Had All the Luck takes place in prewar America, at the edge of The Depression which made of mockery of the hard work ethic and, aggrandized "luck" as the only star of destiny/harbinger of fate that a man could comprehend. This is a subtle but constant theme which runs through many of Miller's works: The unfairness of life.

There is an interview with the director included with the audio in which Michael Hackett expounds on the major themes of Miller's plays, many of which are set forth in this early work, including but not limited to the rhetorical style, the Greek chorus element and, the father-son relationship. While the interview is interesting and educational, it creates an overall didactic feel to the play as a whole (versus a visceral experience) and, for the Miller novice, may qualify the experience as well. When looking at parsing out the play's structure and meaning, there is a tendency to only refer back to what the director has highlighted and, intellectualize the drama.

The performances were all fairly even, though not particularly remarkable. This play is not often performed however, so there is no large legacy of interpretation to either inherit or fight through, and overall it is a solid presentation.

Convo Starter:
About ten years ago a friend of mine found a wallet in a phone booth. Inside the wallet was $300. My friend contacted the person whose ID was in the wallet and returned the wallet to the owner. She said it was a matter of "good karma." I pointed out that she, my friend, also needed the money; so how did she know that the money hadn't been a karmic gift to her? Had she messed with her karma by giving the money back and throwing the universal balance out of whack? I admit that I would have taken the money. Many things in my life have been outright stolen from me and I would have seen the money has a partial payment to redress the balance; that it might have even be construed as the universe's gift to me in my hour of need. What would you have done?

Other Stuff: I purchased a library CD edition of The Arthur Miller Collection (by Arthur Miller; performed by various full casts) from PaperbackShopUS via the Amazon Marketplace. The Man Who Had All the Luck is the first play in the collection and is available for individual digital dnload. I receive no monies, goods or services in exchange for reviewing the product and/or mentioning any of the persons or companies that are or may be implied in this post.