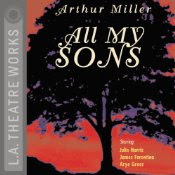 
Larry Keller is a WWII pilot has been MIA for a few years. What remains are the ingredients for an American  Tragedy: Larry's mother who refuses to believe that her son is dead; Larry's father, Joe Keller, who was accused, but eventually cleared of wrongdoing for the crime of manufacturing and distributing faulty airplane parts during the war;  Chris Keller, who lives in the shadow of his brother; Steve Deever, Joe's business partner who is serving time for the crime Joe was exonerated for; George Deever, Steve's son and; Ann Deever, Steve's daughter (and George's sister,) Larry's childhood sweetheart and, Chris' current love interest.

A tree planted as a memorial or beacon for Larry is struck down in a storm and this triggers a cascade of confrontations in the household that careens towards an ugly truth  - a denouement born of grief, sorrow, anger and, resentment. Pathos and angst are wrung out of each scene until there is nothing left but the inevitable razing of individual hopes and a shocking conclusion worthy of a Classic Greek Tragedy.

All My Sons can be a painful play to bear witness to: Souls are laid bare as characters demand to be respected for their principles and motivations, for the persons they are; but are refuted by those closest to them and for whom their ethos has been hewn. Each characters makes a sacrificial offering of their suffering to another, only to be rejected and driven into a psychological corner. But for these same reasons, All My Sons is an important play to experience as well as it exposes the integrity of the foundations of the American Dream. The drive to achieve a manifest destiny is lacerated by the frailties of being human.

Though it is an important play, this particular presentation may not be the best performance. Instead of layering interpretative meaning into the dialog, the lines and monologues are uniformly delivered at a high intensity of rage and bitterness. This is not a play rendered with subtlety or nuance, a point underscored when George arrives at the Keller household for a confrontation. There are accusations and yelling; but all of the sudden George is happy to be back; and then equally as sudden, he's back to being enraged. By not providing emotional room for the characters, by constricting the characters to a monotonous fervor, George has no where to go except to appear as momentarily insensible. It is a delicate scene and a challenge for any director; but this ham-fisted approach robs the scene, and one cannot help but suspect the whole play, of its required elegance.

Other Stuff: I purchased a library CD edition of The Arthur Miller Collection (by Arthur Miller; performed by various full casts) from PaperbackShopUS via the Amazon Marketplace. All My Sons is the second play in the collection and is available for individual digital dnload. I receive no monies, goods or services in exchange for reviewing the product and/or mentioning any of the persons or companies that are or may be implied in this post.