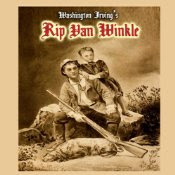 Rip Van Winkle
by Washington Irving
narrated by Christian Rummel
.65 hours
Audible, Inc.
"Rip Van Winkle" is an iconic piece of American literature, ingrained in our cultural memory so deeply that it has become a part of American folklore. Surprisingly, "Rip Van Winkle" is not a novel, not even a novella, but rather a short story that has achieved this iconic status. The basic premise of the story is that Rip Van Winkle, a kind but indifferent farmer and husband, heads to the hills one afternoon to hunt. While traipsing through the Hudson River Valley, he comes across the mid-eighteenth century version of a kegger and indulges in some particularly potent brew. Afterward, he settles down into a postprandial nap and, when he awakes, he discovers that he has been asleep for quite a bit longer than he had expected :-/ Despite it's short length, "Rip Van Winkle" manages to convey time, place and character with incredible acuity, making even the implausible appear like realistic fiction.

Christian Rummel delivers Washington Irving's words at a fast pace, just shy of being hurried and, with a nod of inflection here and there. The narration ignores the tenor of some key scenes, draining the story of tension. Audible.com is marketing this short story as children's fare, which could have informed the narrator's choices; but it is unfortunate that those choices condescend to children rather than expose them to a great story's timbre and texture.

View dogearedcopy map 2011 in a larger map
Posted by dog eared copy at 9:45 AM

Email ThisBlogThis!Share to TwitterShare to FacebookShare to Pinterest
Labels: Audiobook Review, Children Ages 8 to 12, Classics, Where Are You Reading? Challenge