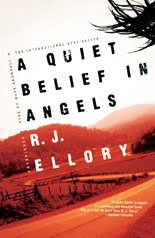 A Quiet Belief in Angels starts in the late 1930's in a small town in Georgia. Little girls are disappearing and their raped, mutilated and murdered bodies reappear, evoking profound angst in the mind of the book's protagonist, a young boy named Joseph Vaughn. Through successful decades, the murders haunt, obsess and firmly take root in Joseph's psyche, informing his world view and his writing. As Joseph tries to escape his past in the literary Bohemia of Brooklyn, it becomes all the more evident that the past will destroy him unless he confronts it and understands it.

The writing in this novel is rich with metaphor. Long discursive passages captivate the listener, evoking strong imagery of places, of people, moods, even dreams. Sentences wander back and forth between the real and the imagined, the present and the past, creating a hypnotic rhythm that ensnares the listener in a story that is equally enthralling and disturbing, beautiful and horrifying. It's unrelenting brutality finally starts to break a little more than halfway through the book, giving cause for accusations that the writer is pulling punches; but A Quiet Belief in Angels is such a taut psychological thriller that the relief is needed in order to continue. That said, the final passages are anti-climatic in that it doesn't feel like the true ending; but rather one that finally lets the reader off the hook.

Mark Bramhall delivers the text in a slow, entrancing Southern cadence that make the material easier going down; though his voice too is unable to sustain the tension and the affection throughout the entirety of the novel. Somewhere between the ninth and tenth finished hour, we lose the character and hear more of Mark Bramhall. If the narrator had been able to sustain his character throughout or backed off from the character early on, the change wouldn't have been as noticeable. The first nine/ten hours though? Mark Bramhall is on par with Will Patton. Yeah, that good.


By virtue of selecting a fictional story to listen to, we are asking the author to deceive us, to take us out of ourselves and see the world from a different perspective and, to do so in artful and impactful ways. We are asking to be manipulated and, authors comply, often evoking certain tropes that they know will effect the reader in a certain way. Some authors use dogs to make you cry and some others, use child killers to incense you. Ellory has chosen the latter, providing the reader with an antagonist that cannot be understood or championed under any circumstance than sheer madness. And, both Ellory and Bramhall have delivered the villain in hard-hitting, purpling punches. It hurts, and a little piece of you dies every day you listen; because try as you might, no understanding actually arrives. Was I literarily pwned? I don't know, but if I was, it was done well and thoroughly.


Other Stuff: I borrowed a library CD edition of this audiobook from Blackstone Audio.

This book qualifies for the Where Are You Reading? Challenge hosted by Sheila at her blog, Book Journey. A Quiet Belief in Angels is set in Augusta Falls, Georgia.
View dogearedcopy map 2011 in a larger map