Where Are You Reading? Challenge: January Status 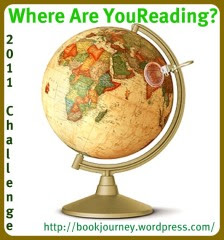 Originally, for the Where Are You Reading? Challenge, I had decided to read whatever I had planned on reading for the year, preferably from my TBR stacks, pin my map and see what happened. Disconcertingly, I realized fairly early on that almost all of the books in my stash are set in England, so I had to be a little bit more proactive in acquiring titles that were actually set in the U.S. I then decided to approach the challenge alphabetically which meant that January would be devoted to AL (Alabama,) AZ (Arizona,) AR (Arkansas) and, AK (Alaska.) Four books, five weeks, so neat, so organized. What could go wrong?
AL - The Most They Ever Had (written and narrated by Rick Bragg) - I actually had two options for Alabama: Gods of Alabama by Joshilyn Jackson (print) and The Most They Ever Had by Rick Bragg (audio.) I went for The Most They Ever Had and semi-consciously decided that wherever possible, I was going to listen to audio editions for this challenge.
AZ - 3:10 to Yuma (by Elmore Leonard; narrated by Henry Rollins) - Ooh, quite excited about this state as I had seen 3:10 to Yuma in hard copy at the local Barnes & Noble. Not really a fan of the Western genre, I wanted to see what the author of Get Shorty and Out of Sight had to offer. I headed over to B&N but they were out of stock. The local library didn't have it either. So I dnloaded it from audible.com. What?! 33 minutes long? That can't be right! But it is. "3:10 to Yuma" is a short story and the book I had seen in the store was a collection. And my library does have The Complete Western Stories of Elmore Leonard which presumably includes "3:10 to Yuma." I had qualms about including a short story in my challenge entries; but seriously, this is a case where size doesn't matter.
AR - Will the person from Central Point who currently has a hold on Shakespeare's Landlord (by Charlaine Harris; narrated by Julia Gibson) please, please pick up the audio, listen to it and return it so I can have my turn? You are screwing up my timetable! Anyway, I picked this title despite my reservations about Charlaine Harris. Last year I listened to Dead After Dark (narrated by Johanna Parker) and didn't particularly care for it. I won't go into it now, but I only decided to try Shakespeare's Landlord after being reassured that it's different from the Sookie Stackhouse series: No kitschy backwoods diners or sexy vampires.
AK - Okay, much research and discussion about "The Call of the Wild" (by Jack London; narrated by John Lee.) It takes place in the Yukon Territory in 1903. Parts of Alaska were then part of the Yukon Territory and a U.S. territory; but not a state at that time. I really wanted to count this as my Alaska entry, but further research indicates that though the snow trek starts at Dyea Beach (in Alaska) most of the action takes place squarely in the Yukon Territory of Canada, so to be fair, it doesn't count. Instead, I've uploaded Caribou Island (by David Vann; narrated by Bronson Pinchot) which I have been told takes place almost entirely on/just off the Kenai Peninsula in the full-fledged state of Alaska.
For the map, I've included all the titles of the books and audio that I've read/listened to in 2011 so far. I included links to the reviews (when I have written the reviews) and replaced the pin heads with the covers of the books. It's been a lot of fun locating the settings on the map, especially when the setting in the book is fictional and I've had to extrapolate from the text where the setting probably is!
View dogearedcopy map 2011 in a larger map
Posted by dog eared copy at 8:02 AM