The Most They Ever Had 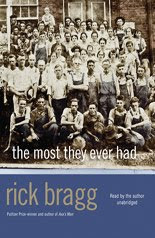 The Most They Ever Had
Written and narrated by Rick Bragg
Blackstone Audio, Inc.
4.20 hours
I do believe that Ms Guilianni, my sixth grade Social Studies teacher, is the one who tried to impress upon the class that history was not a bunch of dates and names and battles to be remembered. History was the story of people and The Most They Ever Had is a great example of what my teacher meant. The Most They Ever Had is the story of a community in Jacksonville, Alabama whose economy, whose lives, were predicated on cotton. The Profile cotton mill offered more than jobs for people, it offered them an opportunity to reach for the American Dream. For eighty years, Jacksonville's destiny revolved around cotton and the mill. Then the mill closed and the world as they knew it, ended. Far from being an affectedly sentimental memoir about his hometown, Rick Bragg narrates his book with affection and candor (and a nice soft Alabamian drawl.) It's not a ploy for sympathy so much as a nod of recognition towards the proud people who worked hard and, deserved dignity; but whose culture was destroyed in the name of global economics. While the book chronicles the history of the Alabamians who signed on at the Profile, the specific lot of a Southern community, the story is really about a lot of people, including the New England textile workers of the nineteenth and twentieth centuries, the timber and lumber communities of today that stretch from Tunkhannock, PA to Southern Oregon, the citrus grovers from Florida to California and, even Silicon Valley. Just something to think about the next time you go to Wal-Mart and you buy a tee-shirt for $2.99: How much is it really costing you?
Other Stuff: I borrowed this book (library edition) from Blackstone Audio, Inc. purely on the qualification that it was set in Alabama. I listened to it as a part of the Where Are you Reading? Challenge hosted by Shiela at her blog, Book Journey.

Email ThisBlogThis!Share to TwitterShare to FacebookShare to Pinterest
Labels: Audiobook Review, Author Narration, History, Where Are You Reading? Challenge