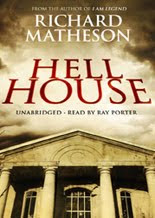 Hell House is about four people who spend a week in a haunted house and who are commissioned to verify the existence of afterlife. "The Four" consists of Dr. Lionel Barrett, a scientist who seeks to empirically prove that paranormal functions are a manifestion of electro-magnetic forces in conjunction with the power of the mind; His wife, Edith, a sexually repressed woman loyal to her husband, but has no dog in the paranormal fight per se; Florence Tanner, a mental medium (one who receives messages from the hereafter) and who believes her gift is from God and; Benjamin Franklin Fischer, a psychic nonpariel who happens to be the only survivor of another team that had gone into that same house forty years earlier. The story is told from the third-person POV as each of the characters experiences exactly why the Belasco mansion is "the Mount Everest of haunted houses." Hell House presents some interesting ideas about what paranormal activity might actually be and maybe even how much of our own fate/destiny is determined by our psychological makeup; but the book's importance lies more in its set-up of themes that will be explored more in Matheson's later works (i.e. What Dreams May Come and Somewhere in Time) such as love crossing the boundaries of life and time.

Ray Porter exhibits more animation than he did narrating The Amityville Horror and he voiced the role of Fischer perfectly, with all the right notes of petulance, reluctance, suspicion and stubbornness the character demands. There were a couple of particularly lewd scenes in which a lesser narrator may have pulled his punches in embarrassment and diminished the intensity of the moment; but Ray Porter delivered with relish. There were some passages that sounded stilted; but that may be because of the type of narrative structure Matheson chose to employ: Instead of the single voice of a protagonist which would have informed the mood and color of the story (i.e. I am Legend,) Hell House attempts to weave together disparate approaches which results in an arrhythmic narrative. 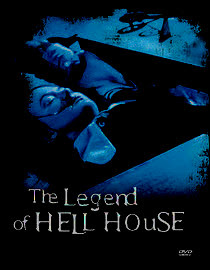 I am not a movie critic but I'm becoming increasingly fascinated by the film adaptations of the books I have been reading. For better or worse, this seems to involve quite a number of movies from the '70s with all its freewheeling hamminess, cheesy sets and props, and low-tech f/x. The Legend of Hell House was no exception! Roddy McDowall, playing the role of Fischer, is seized in convulsive torture as he opens his mind to the powers in the house. This rivals Rod Steiger's performance in The Amityville Horror (1979) as Father Delaney ("I'm blind!") in terms of sheer over-the-topness. The lurid red flocked wallpaper and lamp in Florence's bedroom, far from the faded and spider-webbed props you might expect, shine with the brightness of newly minted bordello. There is certain Technicolor Gothic tenor to all the scenes. And as for special effects, well, they seem pretty lame compared with today's CGI-enhanced movie world; but on the other hand, if any of those things happened to me IRL, I would freak. So while levitating tables, tableware flying through the air and, smoky ectoplasm may seem laughable, I'm not so sure it's less realistic or frightening than the special effects employed now. I will give kudos to The Legend of Hell House for sticking to the major points of the story. The ending was as it should have been (for the most part) and given the mores of the times the aforementioned sexually explicit scenes (which Ray Porter handled with such aplomb) really could not have been staged. Hmmm, even even the current mores of our times, I'm not sure the public would be ready for that!


Other Stuff: I borrowed a library copy of Hell House (by Richard Matheson; narrated by Ray Porter) from Blackstone Audio and; I rented a copy of The Legend of Hell House (directed by John Hough; starring Roddy McDowall) from Netflix.