When I first decided to start de-cluttering my home office, the first thing I did was to take a series of "Before" photos. There turned out to be thirteen photos that covered the various sections of my office (and; no I couldn't get a single shot that encompassed it all!) I decided that each week I would tackle the segment of my office that had been captured in one of the photographs. It's good to have a plan. In fact, there's quite a bit of time required in developing a method of attack for each section. I learned that this week when I just went higgledly-piggedly into the office expecting it to be like last week: After a a few hours, the section would be cleared! Um no. This week I discovered that some de-cluttering solutions require more time and forethought.
Before 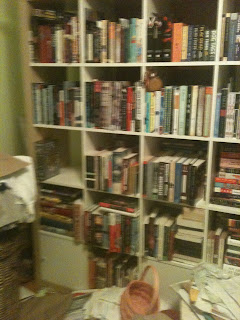 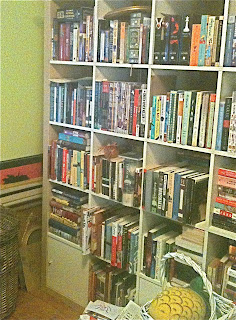 One of the things that happened during last week-end's cleanup was that there were literal "shifts" in the strata of stuff in the center of the room. Stuff disappeared into the maw and other stuff washed up on the shores of my fiction book shelves. Also, apparently, I became Queen of Mixed Metaphors!

One of the other noticeable differences that occurred as a result of last week-end's cleanup was that, in removing a stack of books from atop my woofer, more light was able to make it's way in. Working with an iPhone camera, I had been unable to get a clean, clear photo the first time around; but this time I was able to get a very detailed picture. One can also safely guess that the admittance of light probably has a more positive effect upon my moods than sitting in dismal gloominess :-) (☜ ☜ See that? A smiley emoticon!)

At first blush, there doesn't appear to be much that I need to do and the "After" photo (see below) isn't so dramatic as last week's; but still, there's enough to tackle!
In the upper left hand cube, you can see a box laying horizontally across the tops of books. It's The Complete National Geographic (Every Issue of National Geographic Since 1888 on DVD-ROM.) DH bought it for me for Christmas in 2010 because even then, the clutter had been an issue; and this was DH's response to the years of National Geographics that I had on hand and in storage (Yes, there is a storage unit somewhere... to be discussed later. Much, much later.) I haven't even opened the box set of DVD-ROMs, but I'm going to do so this week. If it's all good, then I'll be donating the National Geographic print magazines to an organization that wants them. I will pay the shipping costs because it will be worth it for me to get them out of here. If the CD-ROM thing doesn't work out, I will get a bunch of magazine files and store the 30+ years of magazines on top of the non-fiction shelving unit. BTW, for those of you who own a backlog of National Geographic magazines and would like a way to find any article you may want to read, The Publications Index is very handy indeed :-) (☜ ☜ Look at that! Another smiley emoticon! Before you know it, I'll be whistling while I work!)
In the next cube to the right, you can see a shiny gilt edge of something. This something is a frame that, uh, frames a needlepoint portrait of Mary, Mother of God. The needlework was done by my godfather's wife in 1978 to commemorate my Confirmation in the Roman Catholic faith. Now, my faith isn't what it used to be; but the needlework is really fine and the overall picture is beautiful. It will be hung in my daughter's bedroom and away from direct sunlight.
In the cube below the first one, you can see a piece of paper. It's an Earphones Award for The Rise and Fall of the Third Reich (by William L. Shirer; narrated by Grover Gardner.) I was the studio engineer for all fifty-seven-plus hours of the production. The Earphones Award was bestowed by AudioFile Magazine to the narrator and he gave it to me for safekeeping. This is not what he had in mind. So, the award goes into a plastic folder thing for now. I would like to have all of Grover's Earphones awards framed and I have a great patch of wall in my office where they could all go.
Diagonally across from the Earphones Award, there is a orange, brownish blob. It is a jar of honey. It was also a hostess gift a narrator brought when he came over for dinner. An Albanian beekeeper in Southern California produced the jar of honey; and for some reason I don't want it opened, much less eaten. It's sort like a little arty icon sitting there. I can't explain it; but there it sits. It's gotta move because it does not belong on a bookshelf. So off to the kitchen, onto a top shelf where hopefully DH won't raid it during some midnight feeding frenzy.
Next to the honey jar there is a CD, Louisiana Fairytale: Tommy Sancton's Crescent City Serenaders. This gets shelved with Song for My Fathers (by Tom Sancton) on a TBR shelf.
And now onto the seemingly innocuous thing: The papers, basket and plushy pineapple you see in the corner of the photo. It doesn't look like much; but it actually fills an entire 20"L x 14"W x 10"H bin and then some. I know this because I've taken all the stuff and put in the described white bin and hauled it into the dining room to be sorted and dispositioned. Ironically, I had to spend some time clearing off the dining room table first :-/
The plushy pineapple, a souvenir to the Dole Plantation in Hawaii when I was eight years old, goes into my daughter's plushy bin. When I recover the Dole patch that was on it, I'll sew or hot-glue it back on. The white basket goes back into the office, this time residing on top of the fiction book shelves, to be brought out again at Easter. The papers were sorted. I'll spare the grueling details of this one for now; but I'll get into it later when we're just dealing with paper clutter. I will say, however, that we are now eating off of TV trays because I've requisitioned the dining room table to do paper triage.
Found objects: A red croquet ball, two 3 lb hand weights, a clear tack and, a dust bunny the size of a small cat. The red croquet ball gets put aside to be later stored with my Alice in Wonderland ephemera (which I believe may be behind door #3, which is currently obstructed by the Mountain of Mess); The hand weights get put in the master bedroom, hopefully to be joined by the workout DVD that goes along with it as soon as I can find it; the clear tack gets picked up off the floor and stuck into the bulletin board (to be put up once I have the floor space to position a stepping stool) and; the dust cat gets consigned to the dust bin.
After 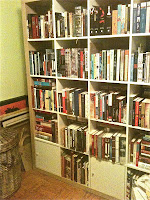 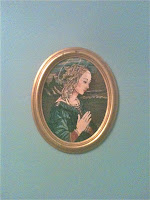