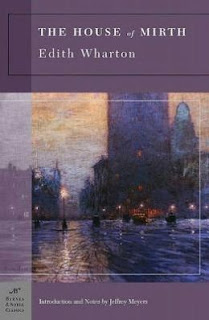 The House of Mirth is the tragedy of twenty-nine-year old Lily Bart who commits a series of egregious social faux pas that guarantee her downfall. Vain, a tease, pretentious, weak and bit stupid, Lily flits though the upper striatum of New York Society with a naïveté that is at odds with her upbringing. Trading in on her beauty and ability to charm the company she keeps, she flirts and snubs through parties on her way to… what? Unable to define her goals and discriminate to that end, she sabotages her opportunities on the premise of some vague morality. Though impoverished when her father is financially ruined and forced to live in a more circumscribed situation than what she was used to, she is nonetheless acculturated with the ways of the upper crust and thrives in the orbit of the wealthy. She knows the rules, the ways of the rich; and yet, she makes a series of incredulous decisions that defy not only convention, but common sense.
Edith Wharton has written a novel about societal Darwinism. Mrs. Astor’s 400 of The Gilded Age evolved, and arguably devolved, as established families lost money and standing and, new wealth and those of a “certain race” crept in. Those who failed to adapt would find themselves consigned to the fringes and even “out” altogether. The exposition of this process through a number of characters in the novel is extremely well portrayed, but none more so than with Lily herself. Lily finds herself caught in a time of transition into the new society at the turn of the century and struggling to adapt to newer circumstances. The novel is written with Lily’s voice and perspective (though technically in the 3rd person omniscient), yet, despite being privy to the inner workings of Lily’s mind which might lend understanding to her modus operandi, the reader finds a curious lack of the survival instinct.
If there is a failing of the novel, it would be that the reader can never come into full sympathy with the protagonist. Whatever you may think of Lily, as a romantic figure, tragic victim, insipid socialite… it’s nearly impossible to know Lily herself. Perhaps this is because Lily doesn’t have a clear definition of herself either. The reader, like her friends, never really knows Lily and it results in a series of misunderstandings. How can you have faith in someone you don’t really know and can’t get a handle on? As one of Lily’s erstwhile friends, Carry Fisher put it when trying to explicate Lily’s situation, “…but I never could understand you, Lily!” Edith Wharton doe not give the reader a special insight into Lily so we can only judge her instead of love her.

This book also qualifies for the What's in a Name Challenge, #6 hosted by @BethFishReads at www.bethfishreads.com, as a book that has a title with an emotion ("Mirth") in it:

This book also qualifies for the Mount TBR Challenge hosted by Bev at My Reader's Block and on goodreads. I've had this book opn my shelves since November 21, 2012: 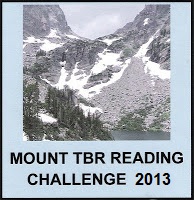 I purchased The House of Mirth (by Edith Wharton; Introduction and Notes by Jeffrey Meyers) from Barnes & Noble in Medford, OR.

I receive no monies, goods or services in exchange for reviewing the product and/or mentioning any of the persons or companies that are or may be implied in this post.