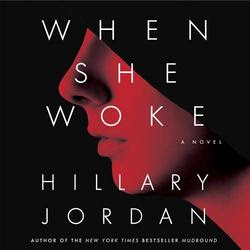 Set in the not-to-distant future and in a society that has sought to redress its issues with religious fundamentalism, When She Woke features Hannah Payne, a young woman convicted of aborting her unborn child. She is sentenced to sixteen years living as a red Chrome, meaning that she has been injected with a virus that turns her skin blood red. Its plot line is very similar to that of The Scarlet Letter (by Nathaniel Hawthorne) and might be considered a homage to the Classic and/or a re-imagining of the tale from the woman's (Hester Prynne as Hannah Payne) point of view.

Hillary Jordan has taken care to cast her characters in a realistic and human way. Hannah Payne expresses her doubts, angers, insecurities and new convictions in way that is believable. The reader may not find her logic unassailable; but her actions and new awareness bear the pedigree of experience. Aiden Dale, as the modern iteration of Hawthorne's Arthur Dimmesdale, is a morally complex man drawn with true pathos and much less of a villain for his cowardice than the original. Jordan has fleshed out the emotional landscape of this story without excessive melodrama and provided a way to connect with the Classic. That is not to say that the story doesn't stand well on its own, because it does. Without having read The Scarlet Letter, a reader would be interested in the characters' psychological development and perhaps question his or her own convictions as they travel with Hannah on her literal and interior journey:

"Was that all her religious beliefs had ever been then, a set of precepts so deeply inculcated in her that they became automatic, even instinctive? Hear the word God, think He. See the misery of humankind, blame Eve. Obey your parents, be a good girl, vote Trinity Party, never sit with your legs apart. Don't question, just do as you're told."


What might give a reader pause is that there is a fine line between honoring a Classic such as The Scarlet Letter and, being unoriginal. The Scarlet Letter certainly provided the creative impetus for Ms Jordan; and despite her claims that The Handmaid's Tale (by Margaret Atwood) was not an influence, the comparisons are inescapable. The influence of The Handmaid's Tale may not have been direct, but Ms Jordan's invites the comparison by creating scenes that are strikingly similar in tone and substance to Ms Atwood's own dystopian novel. Drawing so heavily upon the Classic, and coincidentally upon Ms Atwwod's work, for plot points and character creation may give credence to the charge that Ms Jordan may have borrowed too heavily. Still, what Hillary Jordan brought to the table was a fresh, credible voice to the plight of a woman caught between a rock and a hard place.
Heather Corrigan is renders the text very nicely. The listener will be easily able to discern between interior thought and dialogue and, the mood(s) of the protagonist, Hannah Payne, from whose POV the story is told. Though Heather Corrigan sounds younger than the protagonist, her skill set in bringing Hannah to life is not to be denied. One minor quibble is that the word is "Chrome," not "Crone." Once you know what the word is supposed to be, it's all good :-)

See also:The Scarlet Letter (by Nathanial Hawthorne)
The Handmaid's Tale (by Margaret Atwood)
Other Stuff: When She Woke (by Hillary Jordan; narrated by Heather Corrigan) qualifies for: 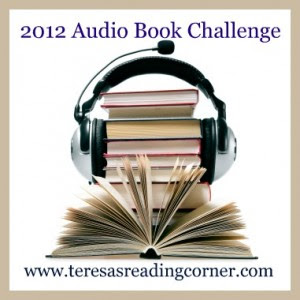 I purchased and dnloaded a copy of When She Woke (by Hillary Jordan; narrated Heather Corrigan) from weread4you.com. I receive no monies, goods or services in exchange for reviewing the product and/or mentioning any of the persons or companies that are or may be implied in this post.