The Pink Chair: Q1. A narrator is paid by the: ▢ hour ▢ page ▢ book ▢ other 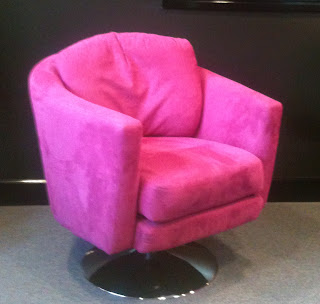 A couple of weeks ago, a letter of inquiry from a potential narrator crossed my desk. This letter was unique in that it did not include a resume or curriculum vitae or, a sample of the candidate's works or, even a link to the person's web-site. Instead, it was a hand written letter that contained four questions that the candidate wanted to have answered before s/he took the the time to create a demo:

Ⓐ Rolled by eyes and had a head-desk moment
Ⓑ Wanted to have it framed for the elegant simplicity of it
Ⓒ Wanted to write snarky comments to all the questions
Ⓓ Actually sit down and answer each question in earnest
Ⓔ All of the above, simultaneously, which caused my brain to nearly implode

And the answer is Ⓔ; but I have decided to go with Ⓓ! Now, there is an outside chance that someone is pulling my leg; but I think not and so, I'm going to answer these questions to the best of my ability this month, starting with Q1 today:
A narrator is paid by the: ☑ hour ▢ page ▢ book ☑ other
Many narrators are paid per finished hour. This means that the narrator gets paid his hourly rate times the length of the finished audiobook. If the narrator's fee is $200 per finished hour and the completed audiobook is ten hours long, then the narrator would earn $2000 for that book:
$NR x FH = $$$$
NR = Narrator Rate; FH = Finished Hour
There are some models out there wherein narrators are paid by studio hours. This means that the narrator would be paid for the time he or she actually spent in the studio to record the book. So, if it took the narrator 25 hours to record a ten hour book, and charged $200 per studio hour, then narrator would earn $5000 for that book:
$NR x SH = $$$$
NR = Narrator Rate; SH = Studio Hour
The studio hour model is not used with those who have home studios because there is no way to confirm how much time a narrator actually spends on recording a title at home.
You may have heard about revenue sharing or royalty sharing. This is a model wherein the narrator basically works on spec, earning no fees for his work. If the audiobook sells, then the narrator gets a percentage of the sales. Iambik, Steerforth Press and Crossroads Press are three audiobook companies that offer revenue sharing agreements and, audible.com's ACX program offers a royalty sharing option. There's no universal or industry equation for this model as it depends on the company; but if I were a snarky person I might put out something like:
(((GS - DT)/50%)/7) !@#$ = $0
You don't really need to know what all the variables mean, just that the number on the right hand side equals zero
Now, I have been told that there are a couple of success stories as far as rShare is concerned; but I haven't met them yet and quite frankly I have my doubts. What I am hearing is that it's not really working out for the narrators and that the rShare publishers are still working on it to make it work. We'll see. rShare has it's champions and we'll talk more about it in a future post. (For more about a narrator's experience with ACX, check out Johnny Heller's blog, Abbreviated Audio: FOR THE HELL OF IT: Special Edition: ACX and Me)
There is one other model for payment that I've come across and that is the straight fee or flat fee. The narrator, usually a celebrity, is paid a set fee for a title or a series and, can run anywhere from four to seven figures:
$FF
FF = Flat Fee
On the other end of the flat fee spectrum, a narrator can be paid to come in to do some piecework. Piecework can be a narrator coming in to re-read a section that has been re-written since the last final was submitted or; marginalia or title work or, even end scripts. These fees are usually a couple of hundred dollars and are comparable to an honorarium paid to guests on late night talk shows:
$ff
ff = flat fee
So basically, it comes down to this:
A narrator is paid by the: ☑ finished hour ☑ studio hour ☑ rShare ☑ flat fee
Welcome to the 1099 world, my friend :-)
Next week on The Pink Chair:
Q2. A quota is imposed upon a narrator: ▢ true ▢ false
Posted by dog eared copy at 10:04 AM