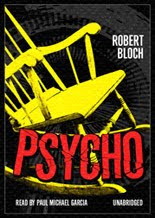 
Norman Bates and his mother run the Bates Motel, located off of the old highway; Mary, a young woman on the run, makes a wrong turn and decides to check in at the motel for the night and; Sam and Lila, Mary's fiancé and sister respectively, wonder where Mary is... Against the backdrop of a stormy night at the ill-frequented motel in California, the drama of Psycho begins to unfold. More than a horror classic with the Hollywood image of blood swirling down a drain accompanied by a piercing sound effect, the novel is an exposition of the psychological motivations of the characters that determine their actions. It would be enough to tell the story with just action sequences, but Bloch takes advantage of the written medium to explore the psyches of his characters and, puts forward the idea that that everyone has a breaking point at which we are all capable of insane acts.

There is a certain awkwardness to the original story, a dated feel beyond the fact that there are no computers or cell phones. There are cultural assumptions that need to be made, such as: In the 1950's, motel clerks care where you're going if you're not in your room :-/ Beyond that though, even the psychology used is outmoded. There have been enormous strides in psychology and medicine that have taken place in the last fifty years or so, which makes the interior voices of Psycho seem rather quaint by today's standards. However, the overall idea posited that the potential energy of insanity within each of us exists and can be triggered, remains valid and interesting.

Paul Michael Garcia imbues the text with the naturalness of a storyteller and, the character work is excellent. The result is an intimate reading of the text that engages the listener's attention. The best character work is the kind that makes the listener wonder if there's more than one person narrated the book and, this happens in particular in the scenes with the sheriff and his deputies :-)

Other Stuff: I borrowed a library CD edition of Psycho from Blackstone Audio, Inc.

This book qualifies for the Where Are You Reading? Challenge hosted by Sheila at her blog, Book Journey. Psycho takes place in Lakeview, California.
View dogearedcopy map 2011 in a larger map

"You can check out any time you like, but you can never leave!"
Hotel California, The Eagles
Posted by dog eared copy at 7:00 AM