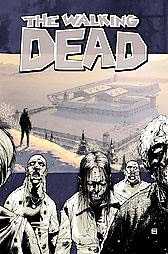 In "Days Gone Bye," (Volume 1) Rick Grimes wakes up from a coma in a hospital. The choice of physical incapacity is interesting as it can be construed as a type of death. In a comatose state, the patient has lost his will, his motor co-ordination, his consciousness and, is not unlike a zombie (generally classified as among the dead category) who shuffles instinctively and displays no consciousness or awareness. But Rick Grimes is not dead and, not a zombie because an external power has been exerted to save him. Medical technology kept Rick Grimes from falling into a true death. There are many different kinds of death displayed through the volumes thus far, but it is the power over death that compels our attention to the panels in "Days Gone Bye," "Miles Behind Us" and, especially in "Safety Behind Bars." From the immediacy of Rick's individual and initial quest (buzzing for the nurse) to the larger communal effort to survive, man's struggle against the inevitable is defined as his attempts to control it!

The zombies are the most obvious dead forms in The Walking Dead volumes. For the shuffling forms the most direct way of rendering them absolutely inert is to smash their brains. In "Miles Behind Us," (Volume 2) we see some zombies detained in a barn in the hopes that there might be a way to cure them. In "Safety Behind Bars," we see an attempt to reason with a newly turned zombie in the hopes that there may be a way to save the former human. Whether by hammer, blade or gunshot, once the threatening forms are rendered truly dead, they are burned. Just in case.

For the humans in the Walking Dead volumes so far, we've seen some take death into their own hands. In "Days Gone Bye" we see one character ask to be left to die and turn zombie so that he might join his zombified loved ones. In "Miles Behind Us," a character, in his grief, puts a gun to his head. In "Safety Behind Bars," we see a couple commit to a suicide pact so that they can be together forever :-/ In the suicide scenarios, each hopes to control the manner of their own demise, not realizing it's not something you can really control in a world in which death is elastic.

We also see death meted out between men in self defense, whether the threat is imminent or actualized; as a matter of vengeance and, as a matter of punishment. As tricky as killing zombies may be (what if there is a shred of humanity buried within the corpse forms?), the matter of death between the conscious ones is definitely messy. In "Days Gone Bye," the power of death is given to a seven-year old boy who is then placed into a situation of imminent, but not actualized, threat. The boy acts instinctively, and perhaps correctly; but not without repercussions. After all, shooting a man is not the same as shooting a deer or a zombie.

In "Miles Behind Us" and in "Safety Behind Bars" adults react to an actual threat of invasion by pulling guns on the newcomers. Harkening back to the "Miles Behind Us" post [wherein I posit that every one wants to belong someone, somewhere,] this tension seems paradoxical. And yet, the instinct to define the pack, and thin the herd of threats is a key to survival.

In "Safety Behind Bars," we see human-on-human lethal violence at fervor pitch. There is a death committed as an act of vengeance. The act is committed with bare hands in a strangle-hold upon the victim. Without premeditation, but tantamount to murder, this death is seen as justified; but nonetheless covered up - ostensibly to eliminate misunderstanding. Or perhaps to avoid creating a morally grayer area where death is concerned. As if the survivors weren't already dealing with the complexity of zombie deaths :-/

We also see death via beheading committed by the hands of a (possibly) criminally insane character. Though premeditated, can the perpetrator be considered accountable for his actions owing to his mental instability? Is he truly insane? Does the horror of his deeds outweigh such consideration? And finally, there is the mandated capital punishment, death by hanging, decreed at one point. Does one person have the right to order an execution? Does a majority vote justify the decision? And again, does the heinousness of the crime override the moral equivocation of such a decision?

Death is enabled through bites, guns, knives, hammers and rope; but death is actualized by man's will. There is not a little irony that, in order to survive, the survivors must kill.

Artwork: "Days Gone Bye," cover and content, was primarily drawn by Tony Moore ; but his contribution is limited to the covers for "Miles Behind Us" and "Safety Behind Bars." In volumes two and three we can see a consistent aesthetic applied: more detail to the characters' faces, better application of gray tones for compositional balance and; a heavier, bolder use of black ink. To demonstrate the differences, I've photographed three panels of the same character in the same mood: Lori Grimes, mad. The top panel is from "Days Gone Bye;" the bottom left panel is from "Miles Behind Us" and the bottom right panel is from "Safety Behind Bars." 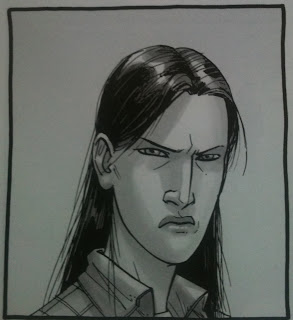 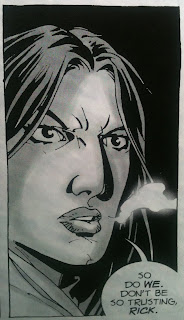 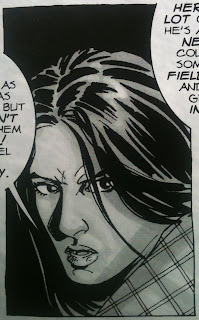 
Other Stuff: I purchased The Walking Dead: Volume 2: Miles Behind Us from Barnes & Noble in Medford, OR 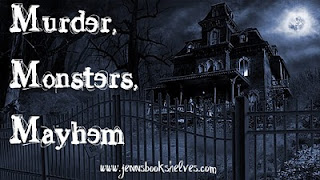 This book also qualifies for the What's in Name? Challenge #4 hosted at BethFishreads. The Walking Dead: Volume 3: Safety Behind Bars is an audiobook with [travel] in the title, "Walking." 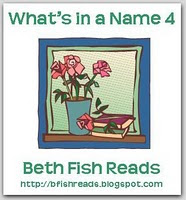