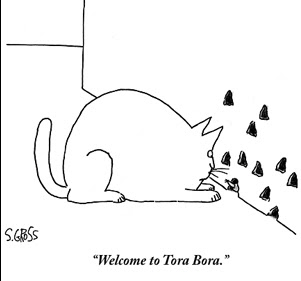 This is apropos of nothing bookish. This is about mice.

Mice. In my kitchen. Under the sink.

I hate mice. In my kitchen. Under the sink.
This means war.
Again.

Ten years ago, when I lived in a Arts & Crafts bungalow just outside of Washington , D.C., we had a mouse problem. Neighboring properties (yes, that's plural) were undergoing renovation and, as a result, field mice started flooding adjacent homes. At first, my sweet, tiny, adorable cat named Thurman (a polydactyl cat whose paws looked like baseball catchers' mitts, hence the name a la Thurman Munson, the catcher for the NY Yankees) was having a field day in the back yard. It looked like a killing field of genocidal proportions. She (yes, Thurman the cat was a she) would bring me offerings of dead mice, dumping them at my feet, I'm told, to impress me. Ugh. But eventually, she retired. Maybe she felt she had nothing left to prove, so she took her place in the windowsills, sunning herself while the hordes continued to pour in. Maybe we should have named her Swartzkopf.

And there were hordes of mice. Our dogs, while willing to patrol the perimeters of the property for larger threats (drunks from the disreputable liquor store) seemed unconcerned about the "smaller" threat that was infiltrating our home. When I discovered the rodents in the kitchen, I freaked. I used to be insanely obsessive about cleanliness and this was unacceptable. Plus, they had holed up in our stove, making turning on the stove or oven an untenable proposition. The smell was nasty. Mice apparently love to hang out in the warm space right under the stove top, leaving their droppings and that strange ammonia smell. Eeewwww!

So now, I'm surrounded by sneaky mice and some of them are holed up in the Tora Bora that is my stove. First thing, we had to remove the stove and throw it away. Yes! Previously, a perfectly good stove, it was now contaminated and ruined. Behind the stove, we cleaned up, soaking the wood floors with Pine Sol. In fact, all the wood floors in our home were swabbed down with Pine Sol because we were told mice hate Pine Sol. This seemed like a good solution as this meant the mice would be disgusted with the smell and go away. And many of them did. But not all.

There was a cell still occupying the kitchen. I would see something flit out of the corner of my eye and track it down until I came to a hidey hole. Sometimes, the holes were no bigger than a dime, bored into the baseboards when telephone lines were installed or; sometimes a mere slit under which the mice would slip. So out came the caulking guns. Now were're sealed, but the mice are either making their way though the caulking or making new holes! Now, at this point, we hear that the best thing to do is spackle the holes with steel wool, chicken wire and bits of broken glass. I'm a bit horrified at the idea of mice getting caught up in this mess and, then dying behind the walls where they will remain as their tiny bodies decompose (and presumably smell.) At this point, however I'm willing to try this and deal with the aftermath later. I worried for nothing because it didn't work.

I'm going insane. In the middle of the night, I'm sitting on a chair in the middle of the kitchen, waiting for a tell-tale sign that the mice are afoot. I begin being able to identify the different mice. I name the big one Omousa bin Laden. Perhaps a flick of a tail against one of the dog dishes (sparkly clean dog dishes mind you. The dog and cat dishes are cleaned every night now and; the dog and cat foods have been sealed in plastic containers out on the porch.) I develop night vision. I can see them. I can hear them. I can smell them. And I am armed. With broom and a shoebox close at hand, I even manage to corner one. I'm closing in. I'm ready. Then DH comes in and offers to help. I say NO! NO! I GOT HIM! But of course DH is a man and he's genetically incapable of not helping with this mouse capture. He helps. Or I should say, he helped the mouse escape. Thank you Mr. Fucking Pakistan.

And now, I turn to my husband and say, we need traps. The catch-and-release kind. So he goes to the hardware store and gets a couple of shiny metal boxes that guarantee the humane capture of mice. We put a bit of peanut butter into the traps and wait. We catch a couple, which DH dutifully releases into a field far enough away that I'm reasonably assured that they will not return. But we only catch a couple. I don't know why they stopped falling for it; but they did.

And now I've stopped thinking about them as God's creatures who should be spared if possible. I want them dead. I can't put out poison because of the aforementioned dogs and cat and; I'm not agile and quick enough to catch them myself and strangle their tiny little throats, so the real traps get set. You know. The kind with the spring arm. Though I want them dead this particular kind of trap sends shudders through me. Unhappily, I set some with peanut butter and some with cheese and you know what? I think mice can see the big spring arm and can tell it's a big trap, because we didn't catch even one. We moved those traps around thinking it was a matter of placement; but no dice, no mice.

Our last ditch effort seemed to have worked though: the glue traps. Using my reconnaissance, I knew their trails, so we set the traps up in their pathways. I won't tell you what we did with the captured mice except to say it was very Abu-Graibish.

And now they're back. Ten years and three-thousand miles away and, out of the corner of my eye, I saw him. And there's the mouse droppings. While not the hordes I encountered before, it's still a nasty bit of business.

I'm naming this one al-Zawahairi.