Recently a few people on twitter decided to listen to Truman Capote's In Cold Blood (narrated by Scott Brick.) As I listened to this fairly recently and, I already was committed to another audiobook, I wasn't up for a re-listen; but I wanted to play too! So, today I offer this, my journal entry from July 2008: 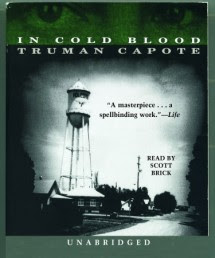 Listening to In Cold Blood was close to having someone read the newspaper aloud to you. Scott Brick was absolutely neutral in his reporting of the text, lending accented language when appropriate, bur never over-the-top. There are some noticeable intakes of breath as Scott Brick launches into a sentence or two and; if you try to up the bass on your stereo, be aware there is no bass to “up!” Overall, however, this is a clean recording. The story itself is intriguing in that you know who, what where, when and, why up front, but you’re compelled to listen to the story anyway. The listener is eager to understand the dynamic between Perry Smith and Dick Hickock (the murderers) and how the KBI (Kansas Bureau of Investigation) puts the case together. The final discs address capital punishment and are definitely served as food for thought.

You can join @bostonbibliophi, @braincandybr and @lithousewife in their twitter listen-along of Truman Cappote's In Cold Blood from July 5-10, 2011. On July 10, 2011 at 8:00 p.m. EST, they will conclude with a discussion (on twitter.) The hashtag is #ICBaudio.