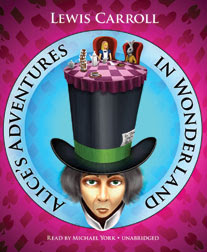 Alice's Adventures in Wonderland is the Classic nonsense tale of an English girl falling down a rabbit hole, there to encounter the strange world of absurdly anthropomorphized animals and playing cards, enigmatic messages and, well, sizing issues :-D
A Classic is usually a novel that has become so ingrained in the collective memory or culture, that one might not be sure whether one has read it or not. The reputation of the book itself precedes the actual experience of reading it and the characters are often the prototypes of later iterations and any number of adaptations. If you've never experienced Lewis Carroll's Alice's Adventures in Wonderland, or read it once before, or even if you've read it multiple times, it bears (another) reading. As familiar as many are with the tale, to actually read or hear the original, un-Disneyfied tale is a pleasure as the nuances of the language surface and fade in ephemeral logic and gently wry humor. The subtlety, whimsy and detail of Wonderland, its inhabitants and their language lends itself to repeated discoveries.
Michael York as the narrator of this audiobook edition brings a nice range of character voices to the story, never sounded absurd himself as he renders the tale of Alice with obvious affection and a master storyteller's grace. His smooth, somewhat effete British voice evokes the romance of an afternoon spent on the Thames and brings the curiouser and curiouser world of Carroll's creation to life.
Other Stuff: I dnloaded this copy of Alice's Adventures in Wonderland from The Audiobook Community forum during their SYNC (YA) listening program in the summer of 2010.
******************************

The first question of course, was how to get dry again... "Ahem," said the mouse with an important air. "Are you all ready? This is the driest thing I know. Silence all around, if you please! 'William the Conquerer, whose cause was favored by the pope, was soon submitted to by the English, who wanted leaders, and had been of late much accustomed to usurpation and conquest. Edwin and Morcar, the earl of Merica and Nothumbria -------'