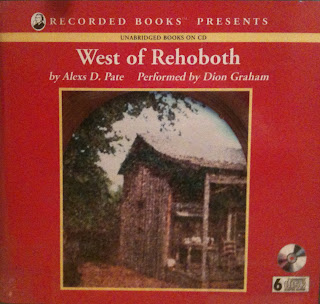 West of Rehoboth is a story of Black History and Black identity set in the summer of 1962 and featuring Edward Massey - a fourteen-year old African-American boy. An introvert and a reader, Edward is fascinated with Hercule Poirot and the idea of using one's "little grey cells." Edward decides to apply his own little grey cells to solving the mystery of Uncle Rufus while on his annual trip to Rehoboth Beach, where Uncle Rufus lives in a shack on the edge of Aunt Edna's property. Uncle Rufus, a man of drunken and threatening notoriety, intrigues Edward owing to unconfirmed rumors and unanswered questions about the older man. Edward's investigation leads to a bit of magic that explores Uncle Rufus' life and an exposition on some of the different ways an African-American can get screwed by simply being Black. Rather than a litany of woes however, West of Rehoboth is a testament to not only survival, but persistence of Black character in the face of injustices.

Alexs D. Pate's writing is lush and sensual, whether describing the tension of the summer streets of North Philadelphia, the late night air of the beach with its mosquitoes and grit of sand or, the heat generated at his Aunt Edna's juke joint. Dion Graham's narration serves as a wonderful compliment to Pate's writing, smoothly navigating the shifts in point of view and different character voices, as well as the different moods of each scene. Overall, a beautiful production.

Recommendation: Because the main protagonist is fourteen-years old, there may be a tendency to classify this book as Young Adult; but I might caution against a pre-teen or young teen listening to the audiobook without adult mentorship. There are adult themes in the book concerning sex, sexuality, violence (including a murder) and an F-bomb. These elements are handled within the context of the story, which is to say, they are parts of the story and are necessary in the telling of the story; but are not the actual focus of the story. Younger listeners may have questions and a more mature person should probably be on hand with the answers.

Other Stuff: I purchased a used library CD edition from a used book vendor (a library) online.

This book qualifies for the Where Are You Reading? Challenge hosted by Sheila at her blog, Book Journey. West of Rehoboth is set in Rehoboth Beach, Delaware.

View dogearedcopy map 2011 in a larger map
Posted by dog eared copy at 6:30 AM

Email ThisBlogThis!Share to TwitterShare to FacebookShare to Pinterest
Labels: Children Ages 8 to 12, Where Are You Reading? Challenge