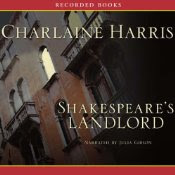 Shakespeare's Landlord
by Charlaine Harris (author of the Sookie Stackhouse series)
Lily Bard Series, #1
narrated by Julia Gibson
Recorded Books, Inc.
6.75 hours
Lily Bard is a woman with a past who has made a new life for herself in the town of Shakespeare, Arkansas. As a cleaning lady, she now leads a low-profile existence of working and going to martial arts classes. Then, one night, she witnesses the disposal of a body and her newfound peace is threatened. Fearful, paranoid, physically strong and careful, Lily starts to ask questions and poke around.
It's a fairly tepid story overall. It isn't great writing and it isn't lousy either, though mediocrity can be pretty damning. This has all the elements of a Sookie Stackhouse story, the Everyman heroine/protagonist, the sexy bad boy, the surprisingly hot sex scene and, the intrigue/mystery. In many ways it's like reading a Sookie Stackhouse novel; but without vampires. It is a solidly executed "whodunit," though mystery buffs will probably figure out who the culprit is fairly early on. There are no clues or characters delivered "deus ex machina" and everything happens within realistic parameters.
The narrator, Julia Gibson, seems to develop a more pronounced accent reflecting the South as the story progresses; but overall she narrated as competently as the material. The characters were all delineated without hyperbole and her pace was consistent throughout.
Recommendation: If you like Sookie Stackhouse, you might be interested in this precursor series; but probably will be disappointed by the lack of flair in the story. If you are not a fan of the Sookie Stackhoue series or have not read the Sookie Stackhouse series, you will probably wonder if adding a vampire or something wouldn't help the story . So, yeah, I'd pass either way.
Other Stuff: I borrowed a copy of Shakespeare's Landlord from the Jackson County Library System (Southern Oregon.) I selected this title for the Where Are You Reading? Challenge hosted by Sheila at her blog, Book Journey. Shakespeare's Landlord takes place in the fictional town of Shakespeare, Alabama, close to the non-fictional town of Montrose.
View dogearedcopy map 2011 in a larger map
Posted by dog eared copy at 10:30 AM