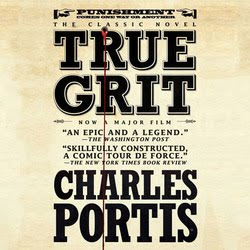 True Grit
by Charles Portis
narrated by Donna Tartt
Recorded Books, Inc.
6.25 hours
The story is about a fourteen-year old girl who hires a federal marshal to pursue the murderer of her father into the Indian Country of Oklahoma. Strong-willed, self-righteous and determined not to be cheated of the fees she is willing to pay the marshal, Mattie Ross insists on joining Rooster Cogburn on the search. Cogburn is mercenary, hard drinking and, unscrupulous in his work ethics - at once displaying the "true grit" required to get the job done and causing uneasiness among those who are trying to re-establish and define law and order in the wake of the Civil War. The contract between Mattie Ross and Rooster Cogburn is complicated by the arrival of a vainglorious Texas Ranger by the name of LaBoeuf (pronounced "la beef") who is himself searching for the same man as Mattie and Cogburn. He attaches himself to the posse and the story becomes as much about the dynamics between the three as it is about the actual manhunt. Set in the 1870s, its a Western that stirs the imagination as it is full of iconic images and scenes: whisky-swilling lawmen, a Bible quoting pill of a girl, gunfights and blazes of glory.
The narrator, Donna Tartt, is an author in her own right who *loves* this book, as averred in her short essay at the end of the audio. I'll not fault her strong Mississippi accent; but she is not a narrator and brings no added value to the production. D.T. lacks the fluidity required to keep the story going, drawing attention to the "he saids" and deploying pauses that even the kindest listener could not interpret as a meaningful or dramatic. There are booth noises, an occasional mouth noise and, some of her words are clipped just a fraction of second too short. This is a quick and dirty production. 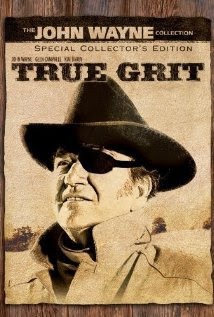 True Grit
directed by Henry Hathaway
starring John Wayne, Kim Darby and Glenn Campbell
The 1969 screenplay is truer to the original story up to a point but then Marguerite Roberts (screenwriter) blows the ending so badly it's painful and, it negates the value of having adhered to the novel's points previously. The '69 movie ends much more upbeat than the novel and paves the way for a sequel. The whole of the movie is much brighter than the novel might suggest, reflecting the film-making sensibilities of the times. Dirt, drunkeness and even blood are more inferred than illustrated - giving the movie a "clean" and staged look. The actors perform self-consciously and none of the characters are fully realized. The delivery of the language is very modern in tone, characters sounding more like mid-twentieth century people than mid-nineteenth. 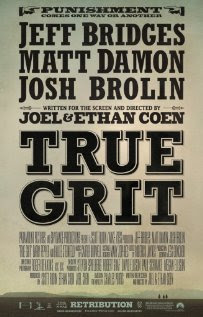 The 2010 screenplay makes some deviations from the book's story lines, most notably LeBoeuf's departure from the posse on two occasions; but more importantly, the ending of the original story remains intact and, arguably, the Coen Brothers' script is more true to the original story in spirit. As there are no legacies from the '69 film in the newer version, it is clear that the Coen Brothers used the book as their primary source of material as opposed to Marguerite Roberts' screenplay. The characters are better rendered in the 2010 film and the oratorical, didactic style of the 1800's is used effectively; but there is an evident self-consciousness of the actors in this adaptation as well, a 2010 sensibility of star power collected on the set. Also, there is a odd lack of tension in the 2010 version that may be attributed to editing, pacing and/or, the pervasive use of the mid-range shot.

Recommendation: Read the book in print. The audio and the movies all fall short of Charles Portis' writing.

Other Stuff: I purchased and dnloaded the audio edition of True Grit from weread4you.com The 1969 film adaptation was rented from iTunes and; I saw the 2010 film in the movie theater (Cinemark Tinseltown USA in Medford, OR.)

True Grit qualifies for the Where Are You Reading? Challenge hosted by Sheila at her blog, Book Journey. True Grit is a short novel set in Western Arkansas and, Eastern Oklahoma in the Indian Territory/Choctaw Nation.
View dogearedcopy map 2011 in a larger map
Posted by dog eared copy at 3:16 PM