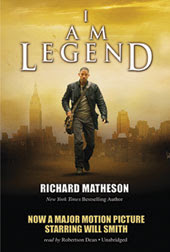 I am Legend
by Richard Matheson
narrated by Robertson Dean
Blackstone Audio, Inc.
5.30 recorded hours
A couple of months ago, I was in a hotel room with a flat screen TV, cable, and a remote all to myself and the moment was glorious! The offering across many channels that night was I am Legend (starring Will Smith) and so that's what I settled into that night. I had not read the book or read any reviews about it so I didn't know to be outraged at the deviations from the original story by Richard Matheson or even what it was about. The film features a scientist, Robert Neville, who barricades himself in his home and lab while a viral contagion sweeps the world as we know it and turns everyone into mutants. The two items that caught my attention in the film were that The Infected (apparently something on the order of zombie vampires) were living in communities ("hives") and that they adapted in order to survive. I was hoping that the original book would explore those themes more. When I reviewed The Reapers Are the Angels (by Alden Bell; narrated by Tai Sammons) I was reminded of the film, something about the loneliness of the protagonists, that both had undertaken missions in their new world landscapes and, some ineffable quality that must be the stylistic glue that defines post-apocalyptic tales. Le0pard13, in his comments to The Reapers are the Angels brought I am Legend, the audiobook to my attention and so I made it a point to go borrow a copy from Blackstone (The irony of other reviewers bringing audiobooks that are in the Blackstone catalog to my attention does not escape me. That said, Blackstone produces a lot of audiobooks and it's physically impossible for me to have listened to them all.)
The horror genre has lousy PR. When the horror label is slapped on a work, images of lumbering monsters like Frankenstein or campy ghouls like zombies come to mind. Despite that fact that the prototypes of the horror genre, Mary Shelley's Frankenstein and Bram Stoker's Dracula are very rich in literary style and content, the film industry has corrupted the idea of what horror is about and given us Bela Lugosi and CGI-enhanced zombies. True horror is not about the monsters, it's about what it is to be human. True tales of horror delve into the human psyche and explore what it is that makes us human in the face of dehumanizing or inhumane conditions. When it's clear that the antagonists are undead, it's an easy call to make as to what makes us human; but what about when maybe some of the antagonists are not as undead as the others? Or it's someone you know? Or when you feel a sympathy or understanding for one or more of them?
The idea of what makes us human not only resides in the contrasts or relative comparisons, but in our sense of history. When you are the only one who remembers the past, who are you in the new world? What if your memory is a legacy that is not valued in the new world? What is it to survive in a place where there is no past but you are compelled not merely to survive but move forward? Who are you? What are you?
The audiobook is narrated by Robertson Dean who reflects the pathos and the vacillating sanity of Robert Neville, the last known survivor in a world plagued by vampires. There are hysterical gasps as Robert Neville reaches out for love, alcohol-fueled bouts of insanity, the raspiness of a little-used voice, the intellect of a man grasping at the last vestiges of civilization and his own sense of self and, the resignation of a man who understands all too well the fate at hand. The range of Robert Neville's psychological states is expressed with all due flair and nuance by a narrator clearly connected to the text, to the story, to the man that is Robert Neville. The vampires in the story are foils against which the tragedy of Robert Neville is played out.
As for the movie starring Will Smith, it is not Richard Matheson's story in style, content or spirit. I don't expect movies to adhere to the novels they are based on but I am disappointed when the screenwriters completely abandon the spirit of the writing as is the case with I Am Legend. In the movie, there are hints of Robert Neville's pathos ( e.g. the scene with the cartoons;) but all the events that lead to a fuller examination of what it is to be human, the set-ups that would have truly made this a first class horror film, were removed and replaced with action-adventure sequences. The movie is I am Legend in name only.
n.b. Le0pard13, in his blog Lazy Thoughts from a Boomer, has a comparative review post featuring the graphic novel, the three movies that were based on I am Legend and the audiobook. Check it out!
Posted by dog eared copy at 8:55 AM