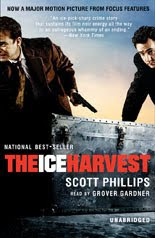 The Ice Harvest
By Scott Phillips; Narrated by Grover Gardner
4.50 recorded hours
Blackstone Audio, Inc.
The Ice Harvest
Based on the Novel by Scott Philips
Directed by Harold Ramis
Starring John Cusack, Billy Bob Thornton, Oliver Platt, Connie Nielsen, Randy Quaid and Mike Starr
1.50 hours running time
Focus Features; available at iTunes
Christmas Noir is all about the space between the holiday lights and in that negative space is where The Ice Harvest takes place. At Christmas-time, one's attention is usually drawn to the lights that trim the house, the glittering star atop the tree, the Light of the World whose birthday we ostensibly celebrate. But Christmas Noir takes a look underneath, at the clogged gutters, the light in the strand that is out and, the giant sagging inflatable snow globe sitting on the front lawn. In The Ice Harvest, it is no accident that the writer details the darkened letters in the strip club's neon sign, the blood stained snow in the parking lot or, in the movie, rain desecrating the Christ child's body in the town's Nativity display.
The Ice Harvest is about Charlie Arglist, a lawyer of dubious morals and ethics who works for a local crime syndicate out of a Kansas city. His plans for this particular Christmas Eve are to clean out his boss' cash reserves and leave town. We follow Charlie as he scurries from strip club to strip club, bars and spartanly furnished homes as he attempts to tie up loose ends and put his past behind him.
Both the book and the movie unapologetically embrace the absurdity that is the (flawed) human. The comic aspects of the story and its characters rise very close to the surface in any given situation, providing a way for the audience to make some of the scenes more psychologically bearable. But while the book's style hews closer to the grim and grisly, the movie plays more to the comic aspect and can be justifiably accused of pulling its punches when it comes to the darker moments of the story, especially at the end. It's shame really, because in deciding to produce a dark comedy instead of a modern day noir movie, the film did not seem to gain anything. It certainly did not go on to be a blockbuster and its status as a dark comedy is dubious at best. That said, it's worth watching for the performances of John Cusak (Charlie Arglist,) Billy Bob Thornton (Vic Cavanaugh, Charlie's partner-in-crime,) Randy Quaid (Charlie's boss,) and Oliver Platt (Charlie's brother-in-law.) Connie Nielson as Renata, the strip club manager and love interest was okay. She was certainly sexy, just not exotic enough. And maybe that's the best description of the film as a whole.


Other Stuff: I picked this title as the final audiobook in the Sounds Like a Mystery Holiday Challenge wherein listeners pick four titles, preferably mysteries or thrillers, each featuring a holiday. How I picked this title was that I went to the Blackstone Audio web site, typed "Christmas mystery" in the search box and chose the first hit that was either a stand-alone or a first-in-series. I then went over to the warehouse and borrowed a library edition of the audiobook. I did NOT review the audiobook per se due to a conflict in interest. I rented the movie several years ago and prior to listening to this audiobook and again this past week (from iTunes) to watch after I had listened to the audiobook.
Posted by dog eared copy at 12:43 PM