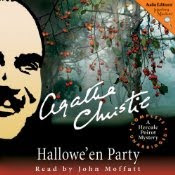 Hallowe'en Party
by Agatha Christie
narrated by John Moffat
6.90 recorded hours
BBC Audiobooks America
The Yahoo! Group Sounds Like a Mystery (S.L.A.M.) is sponsoring another little mini-challenge, the S.L.A.M. Holiday Challenge, wherein participants pick four audiobooks, preferably mysteries that have a holiday theme. The first book I chose for this challenge was Hallowe'en Party and I scored a copy from the Jackson County Library System which serves Southern Oregon.
In this later Poirot mystery (1969,) Poirot himself is an older gentleman who must negotiate the changing mores of the times and, their influence on the crime as much as he must be able to discern the facts of the case. The case involves the drowning of a 13-year-old girl at a Hallowe'en Party and overall, the plot is a bit thin and incredible; but does underscore the social commentary that Agatha Christie, clearly an older woman herself dismayed at the changing world, has embedded in this tale. Though a listener may argue that the story remains relevant to present times, it does get a bit tiresome after a while.

The narrator, John Moffat starts off reading rather quickly and I was, at first, afraid I was going to have trouble keeping up; but he either settles down or I got used to him because I ended up not having any trouble at all. His character delineations were excellent, to the point that, though it sounds cliche, there were times I wondered if I was listening to a single narrator!