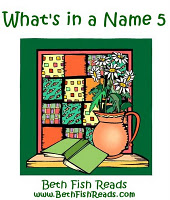 Ah, it's time for my post-prandial wrap-up in the What's in a Name? Challenge! So far, I've read for five out of the six categories; but by December 31, I expect to have completed the entirety of the challenge. This past year, the six categories were:

The Scarlet Letter (by Nathaniel Hawthorne)

I read like a mad woman over the first week-end of 2012 and posted my review on January 3 and; unbelievably, there were others who beat me not only in posting to this category; but in completing the challenge! It was a great reminder that this is not a competition! There are no prizes other than the reward of reading! So yes, I still won! :-D

Anyway, right after reading The Scarlet Letter, I promptly set to re-reading The Handmaid's Tale (by Margaret Atwood) and Nini Holmqvist's The Unit, and then onward to listening to When She Woke (by Hillary Jordan; narrated by Heather Corrigan.) I also went on to read more of Margaret Atwood's works (Alias Grace and The Blind Assassin) and later in the year, The Wordy Shipmates (by Sarah Vowell.) It should also be noted that I drafted several long essays about society and morality and women and stuff and, on this Thanksgiving week-end, trust me, you should be glad that I didn't bore you to tears by actually publishing any of it :-)

More Margaret Atwood! I'm not sure, but I'm pretty sure I could have done most of this challenge just using Margaret Atwood titles (Snake Poems, The Penelopiad, Morning in the Burned House) except that I didn't think of it until now. Also, I can't seem to think of an Atwood title with a topographical feature in the title, so it would have blown the idea up anyway :-/

After reading Oryx and Crake, I was actually pretty mad at Margaret Atwood. In the Handmaid's Tale, I thought the epilogue was a few too sentences too many; but with O&A, not nearly enough sentences were written. I mean, really, would it have killed her to write one more sentence at the end to give us a sense of, well, an ending? Well, she did write a sentence more. Actually she wrote The Year of the Flood and it answers all of the questions raised in O&A for which I was grateful. Maddaddam, the third novel in the series is slated to be published in 2013, and while I'm looking forward to it as an expansion of the world that Atwood created, I don't need to read it to get a sense of closure.


From the Land of the Moon
(by Milenus Agus; translated from the Italian by Ann Goldstein)

This review for this novella was the last review I wrote on this blog. It's not very good; but it's short. I point this out in the context of the next next two books for which I wrote no reviews:

I wanted to love this novella. I really did. Having been to Monterrey, CA, I loved the idea of having an actual place to connect with the setting of the book. And really, come on! John Steinbeck! Who hasn't been moved by The Grapes of Wrath, The Red Pony and/or Of Mice and Men? Also, the jacket blurb offered something along the lines of an Arthurian tale: "Like the Knights of the Round Table, the dreamers who gather at Danny's house share joy and fellowship, triumphs and sorrows." Alas, the freeloaders, drunks and cheats who populate these pages have more in common with the crew hanging out at 7-11 with nothing to do than with the Romantic figures of Camelot. Seventeen chapters over two-hundred pages of post-war (WWI) vets who never quite get it together.

The Reptile Room
(A Series of Unfortunate Events #2, by Lemony Snicket)

The Reptile Room continues the story of the three Baudelaire orphans who wind up in the custody of Uncle Monty, a respected herpetologist. Lemony Snicket always forewarns readers that these tales do not end HEA, and yet I find myself once again surprised that this is in fact true! I think hope endures on my part because I know that these are children's stories ergo they can't possibly be this "angsty!" Regardless, the stories are clever and and certainly had me wondering what was going to happen next!

So what's up with that? Why didn't I post the reviews for the last two books I read? And seriously, the review for From the Land of the Moon was pretty half-assed at that. Actually, if you've been following my blog for the past six months, you'll notice that not much has been going on at all....

It's time. It's time to own up that I just don't have it in me anymore as a blogger. Since July, a lot of things have been going on in my life, a lot of things have changed and blogging isn't working out for me anymore. So as the crude but apt saying goes, "It's time to shi!t or get off the pot." On 12/01/2012, I'll be closing the blog to comments. I'll still be on twitter (@dogearedcopy) talking about books that I'm reading and, I'll still be around to support other bloggers' features as best I can. I just won't be posting here so much if at all. It's a sad but ultimately correct decision that I've taken way too long to arrive at; but now that I've said it, it's terribly freeing :-)

I love you all,
Stay Cool and Keep the Faith,
Tanya

P.S. - What about the sixth book, "A book with a type of house or domicile in the title"? I have a copy of The Kitchen House (by Kathleen Grissom) sitting here and I fully expect to have read it by the end of the calendar year and declare #wain5 completed. If you're interested in what I think about it, follow me on twitter... :-)

I've actually spent the past couple of days pulling down the stacks and sorting out books, finding the ones that would qualify for next years challenge:


(Text captured from www.bethfishreads.com/ What's in a Name? Challenge #6)