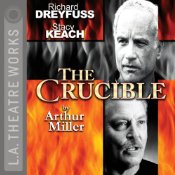 John Proctor must defend both his wife and himself against the charges of witchcraft that a a former lover of his has instigated against them. Abigail Williams, a spiteful seventeen-year-old who initially accuses Elizabeth Proctor of witchcraft may have done so to get Goody Proctor out of the way and assume the Goody Proctor's place; or she may have leveled the charge as an act of revenge against John Proctor for discontinuing their affair. Whatever the cause, Abigail Williams has only to act convincingly for a community of superstitious and gullible people for the charge to gain credibility. John Proctor, in his attempts to save his wife, gets caught up in the same vortex of ignorance and irrational beliefs and ends up having to decide between honor before God and honor amongst men. The time and setting is Salem, MA in the late 17th century - a time devoid of forensic science and a time when conviction carried the weight of evidence. The Salem Witch Trials became infamous in their unswerving and dogmatic approach that blinded the justice system to the truth.

This classic play of Arthur Miller's was written in response to the McCarthyism that held the Senate and the public in its thrall in the 1950s. Fears of Communism had reached fever pitch and no one was above suspicion. Many were accused with no more than a naming from a "witness"  and as a result, many lives and reputations were destroyed as common sense was routed out in favor of unsubstantiated claims. Overall themes of the father-son relationships and legacy, of the American Dream, of the Greek sense of tragedy that are explored in many of Miller's plays are largely missing in The Crucible owing to the play's very specific intention of being a didactic tool to show the public the insanity of McCarthyism.

The star-studded cast of veteran stage actors promises extraordinary performances and they deliver. This was originally a BBC Radio production recorded in Culver City, CA and the directorial expertise that BBC Radio brings to audio drama is not to be denied. Each role is given its due, creating a dynamic tension. The emotive interpretations, ranging from whispers to screams, generate uneasiness as the tragedy unfolds. There are, however, instances when dialogue is difficult to discern. Uneven sound levels and low registers/frequencies make certain nuances of the play hard to pick out if the listener is not on headsets.

Other Stuff: I purchased a library CD edition of The Arthur Miller Collection (by Arthur Miller; performed by various full casts) from PaperbackShopUS via the Amazon Marketplace. The Crucible is the fourth play in the collection and is available for individual digital dnload. I receive no monies, goods or services in exchange for reviewing the product and/or mentioning any of the persons or companies that are or may be implied in this post.