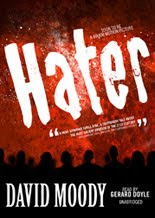 Hater is the first in the Hater Trilogy and originally an online novel that the filmmaker Guillermo del Toro sponsored into print (and purchased the film rights to.) It's a horror novel about outbreaks of unprovoked violence that have reached pandemic levels. The aggressors have been labeled as "Haters" by the media and the government has warned all unaffected people to bunker down. Danny McCoyne, frustrated worker at a Parking Fine Processing office, henpecked husband, and exasperated father, bears witness to the early stages of the outbreak; and when it becomes clear that the social fabric of his town has been rent, he secures his family in their home. The sections where Danny is locked in, cut off from media interpretation of events and not knowing what is going on, are reminiscent of I am Legend (by Richard Matheson) in that we see the protagonist undergo the psychological change of the besieged; but the main interest and appeal of the story lies within the chapters in which there is a fundamental change in perspective. This is where moral certainty disappears and the reader/listener wonders who the true villains of the piece are. Unfortunately, the ending of the novel is poorly executed in terms settling up on the score of moral equivocation (Is a preemptive strike morally correct?); and unsatisfactory in terms of a denouement. The latter may be to entice readers onto the next installment in the series, Dog Blood; but by the end of Hater it is doubtful whether the listener could care as to what happens next to either Danny or anyone else.

Gerard Doyle is the Irish narrator of Hater. The setting of the story is never specified; but it can be inferred that Hater takes place somewhere in the UK and an Irish setting is as good as any for the story. GD does a great job of narrating the role of the beleaguered, whiny, spineless Danny and taking us through the changes in Danny's life as he becomes more assertive. The pacing of the narrative matches the character's development: Doyle starts off with a lazy, slow pace; but quickens as the tension and action mount.

See Also:
I am Legend (by Richard Matheson; narrated by Robertson Dean)

Hater (by David Moody; narrated by Gerard Doyle) qualifies for: 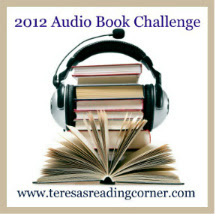 I borrowed a library CD edition of Hater (by David Moody; narrated by Gerard Doyle) from Blackstone Audio, Inc. I received no monies, goods or services in exchange for reviewing this product or mentioning any persons, companies or organizations that are or may be implied in this post. I originally picked up this book because I thought it was a zombie novel; but it turns out that zombies are only mentioned in it as a passing reference and do not exist as characters in the novel itself. And probably not outside the novel either :-D
Posted by dog eared copy at 12:01 AM