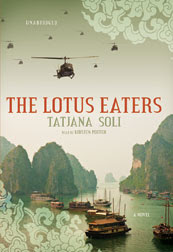 Matterhorn (by Karl Marlantes) whetted my appetite for more novels about the Vietnam War. Previously a topic that did not particularly interest me, given that I'm not much for topics that happen in my own lifetime, the Vietnam War had made little impression upon my quotidian thoughts. That changed when Karl Marlantes managed to dump me in the middle of the jungle. So now, the Vietnam War has gotten into my head. Everyday I think about it. Sometimes it's a small thought like when I see a Vietnam War Veteran’s license plate. Sometimes it's a bigger thought like when journalists compare Iraq with Vietnam. But the point is, that the Vietnam War has become a part of my living history, my present, even though I was not there. The most natural way for me to feed my interests is to read. Fiction. Non-Fiction. It doesn't matter because in reading more and more about any topic, what is true becomes evident and what isn't falls away.

When Matterhorn was reviewed in the New York Times Book Review, a companion review of The Lotus Eaters also appeared (read Danielle Trussoni's review and Janet Maslin's earlier review.) I was at first reluctant to pick up The Lotus Eaters because it didn't sound gritty enough. It sounded more like a love story for women to read then a book that would transport me to the Vietnam War. I can’t pinpoint what changed my mind; but it may have been pure laziness. The company I work for produced the audio and so I could (and did) walk over to the warehouse and borrow a copy. And besides, there is a helicopter on the cover…

The story is about Helen, a girl who arrives in Vietnam as a novice photographer, ostensibly choosing Vietnam because she wants to discover more about the circumstances of her brother’s death as a soldier. It becomes clear however, that Helen’s own nature has led her there and, now that she is in Vietnam, is intrigued by the land and people. But the overarching theme of the novel is really the addictions that war junkies (the hard core soldiers, the correspondents and photographers who stay on and, the civilians who remain) both relish and suffer despite common sense and the relationships that would otherwise temper risky choices.

The book opens with the fall of Saigon. The listener becomes a voyeur of events that unfold during that day in April 1975 when the crush of people motivated by fear and desperation struggle to escape the approaching conquering armies. The listener follows Helen, the veteran female war photographer as she negotiates the physical and psychological detritus of the city. It becomes clear that this is not your musical, Miss Saigon. Images of the day imprint upon the mind’s eye as much as a newspaper photograph would, a clever literary technique given the protagonist’s profession. This photograph-as-prose approach is subtle in the beginning and more obvious later when certain scenes are literally framed.

Kirsten Potter’s voice is very cool, calm and detached and, appropriate for the novel. Her voice is clear and transparent enough to tell the story and very subtle changes in her tone convey a shift in mood and/or speaker and, accents are used sparingly. The listener is relegated to the third person omniscient POV from the onset of the book and remains there as the author intends. And therein lies my quibble. I don’t want distance from the events. I want to feel them. And I don’t. Still, the highly descriptive prose and the writing technique make this a worthwhile listen. Just don't expect Matterhorn.